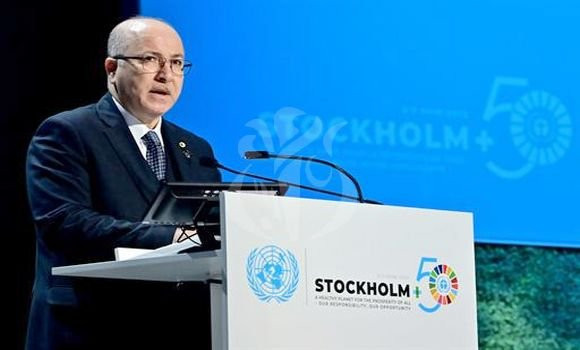 STOCKHOLM (Sweden) – Thursday, 02 June 2022 (APS) – Prime Minister Aimene Benabderrahmane said Thursday, in New York, that Algeria works for the implementation of President of the Republic Abdelmadjid Tebboune’s programme for sustainable development in its three dimensions, through a series of governmental and sectoral plans.

In an address at the general debate of “Stockholm+50,” the high-level international meeting on environment, that he attends as the representative of the president of the Republic, Benabderrahmane stressed that Algeria had been facing for decades growing environmental crises, such as climate change, loss of biodiversity, desertification and land degradation.

In this respect, the premier also mentioned water scarcity, wildfire and flooding resulting from torrential rain, which are great challenges reducing the ability of countries to meet the increasing needs of their populations in drinking water, food and other social benefits such as health and jobs.”

Mentioning the steps taken by Algeria, he cited the action plan “for the rehabilitation of the Algerian green to bring the forest cover to 4.7 million hectares and the restoration of the degraded ecosystems.”

Through this pioneering project, the launch of which coincided with the first Stockholm conference, the Prime Minister stressed, “Algeria is among the first countries to take an interest in environmental and climate issues.”

“The rehabilitation of the dam will be of great benefit to Algeria, and also to its immediate environment.”