The Algerian coast is 1,200 kilometers of fine sandy beaches bordered by a turquoise sea. Bringing together all the major cities on its territory, and full of magnificent natural sites, the region is today one of the most touristic in the country. From Algiers la Blanche to Oran la Radieuse, passing through Annaba and the wild coves of Kabylia, the coast is undoubtedly a delight for hikers, swimmers, and lovers of fishing and water sports. Tourist activity in this part of Algeria does not prevent the preservation of marine flora and fauna. A true place of relaxation, the Algerian coast is also a place rich in history, the seaside being dotted with several archaeological sites from the ancient or Ottoman period.

Nicknamed “El Bahdja” (the joyful) or even Algiers the White, the capital is today the first agglomeration of the Maghreb. Founded in the year 960 on the ruins of the ancient Roman city Icosium by Bologhine Ibn Ziri, the ancient Ottoman city stretches for some thirty kilometers. It is bordered to the north and east by the Mediterranean Sea forming the famous bay of Algiers, and dominated by the Casbah – the old Muslim city. Multiple foreign influences (Roman, Turkish and French) have shaped the Algiers region, making it a cosmopolitan region open to the world. From the mythical Kasbah to the traditional bouqalettes, through its gastronomy, the city of Mohamed Racim has taken advantage of its important cultural heritage. A few kilometers away, we find Tipaza the ancient Roman city and its incredible ancient museum, and further still there is Kabylia and its steep coves which are absolutely worth seeing. From Jijel to Béjaia, via Tizi Ouzou, everything here invites you to relax.

The Constantine coastline is certainly much less recognized than that of the west, but it is not without charm. Nicknamed the “city of suspension bridges”, Constantine (former Cirta) is built on a rock dominating deep gorges at the bottom of which flows the Rhummel wadi, in the absence of the sea. It was founded by the emperor Constantine I who gave it her name. City of mâlouf, the famous Arab-Andalusian music, Constantine is a very important cultural and university center. Monuments such as the Great Mosque of Emir Abdelkader or the Bey’s Palace bear witness to the architectural richness of the city. However, the real important city on the Constantine coast is Annaba, the old Bône. It is one of the cities with the most beautiful coast in Algeria. Built on the ruins of the ancient city known as Hippo, the city is today the fourth largest city in the country. The main point of interest in the city, besides the ancient ruins, is the Basilica of Saint Augustine, erected in memory of this priest born in Algeria in 354 BC. J-C, who made the city of Hippo famous. The other major city on the coast is Skikda, the city of strawberries. Formerly called Philippeville, in homage to King Louis-Philippe, the town of Skikda was a small commercial port which has grown considerably today.

Magnificent beaches and great ports, this is what sums up Orania. Nicknamed “El Bahia” (the radiant), Oran is the second city of the country. Its coast is dotted with beaches, some of which are among the wildest in the Mediterranean. The metropolitan area now has nearly two million inhabitants. Coming from a turbulent colonial past (Spanish, Turkish and French), the region has known how to form its own identity. Today it is recognized for its impressive cultural heritage, including the raï. This style of music, as rebellious as it is sensual, has become the city’s ambassador around the world. Second city of Orania, Tlemcen, located at an altitude of 800 m, is the only city in Algeria to be able to boast of having Moorish buildings of the quality of those of Andalusia. Nowadays, what we call “the city of cherries” is a great place to relax and very pleasant to visit. Mostaganem, meanwhile, has kept an old character, but has also opened up to a modern economy. For proof, just go to the new district of Tijdit, where the beautiful surrounding beaches allow you to enjoy the sun.

No oasis is like another, they are maintained with great art and exceptional science on the threshold of the Algerian desert. The oases are colorful and paradisiacal spaces which leave all visitors dreaming… These are the desert islands, where the wadis carve a furrow of happiness, the palm trees stand watching over the prosperity of its inhabitants. The Algerian oases are impressive and mythical. It is the result of distinctive agricultural and architectural know-how. Among these oases, appear Bou Saada, “the city of Happiness”, Biskra, “the queen of the Zibans”, El Oued, the “city of a thousand domes”, Touggourt, the region of the dunes (north of the Great Eastern erg), Ouargla , the immense oasis whose palm grove has more than a million date palms, Ghardaïa, the city in the shape of a pyramid (founded in 1053) and Laghouat the authentic gateway to the desert (400 km from the capital Algiers). Certain know-how and an exceptional science of irrigation, the Algerian oases are the most beautiful in the world. It is a fresh and limpid water which gushes from the bowels of the earth, and which the ingenious hands of Algerian farmers bring to the surface to transform the desert of sand into a paradisiacal landscape. Several large cities are famous for their oases. This is particularly the case of Tolga, which is the most important Ziban oasis. The city owes its fame to the quality of its dates, the “Deglet Nour” (fingers of light). However, the most famous palm grove in the country remains undoubtedly that of Taghit, a real gem of the desert.

Located in central Algeria, Le M’zab is a rocky plateau with an altitude varying between 300 and 800 meters. It is a set of five oases, which brings together five ksours (fortified villages): Ghardaïa – Melika – Beni-Isguen – Bounoura and El-Atteuf; and two isolated oases further north: Berriane and Guerrara. At its foot, the houses, with tiny windows and low doors (to protect themselves from the sand wind and the heat) cling to each other and the narrow alleys form a veritable labyrinth. Each city is protected by ramparts and gates which allow access to it. Palm groves are inseparable from these cities because they house the summer residences which welcome the population during the hot weather. The gardens are lush and fruit abundant thanks to the ancestral irrigation system. The Mzab valley is part of the world heritage and has been represented in painting by many orientalist painters.

The Sahara, a desert located in the north of Africa, extends over ten countries (from Morocco to Mauritania, via Sudan and Niger), however it is on Algerian territory that it occupies the most area. The term Sahara is of Arab origin (As-Sahara) which means desert or steppe. It is therefore a pleonasm to say the “Sahara desert”. It is a hot and dry desert: in summer, it is over 50 degrees during the day; in winter, it can be -5 degrees in altitude. Previously, the Sahara was swampy. Covered with steppe and savannah, its fauna was very rich. Today all that remains are fossils lost in the sand and cave paintings left by our ancestors in caves. It is a place where time seems to have no hold on life, so the dunes, changing with the wind, are ephemeral and the rocks immutable and eternal. Silence is the master of a kingdom where the beauty of the landscapes of sunrise and sunset, taking on colors seen nowhere else, takes the viewer’s breath away.

The ergs are large massifs of dunes which occupy about 20% of the surface of the Sahara. They evolve according to the prevailing winds. The climatic conditions there are extremely severe. The rare traces of vegetation are concentrated in small oases located at the perimeter of the desert. Among the largest, we find that of El Oued in the north. However, it is in the Grand Erg Occidental that we find the Saoura Gardens. From the name of the wadi that crosses it, the Saoura valley is truly one of the most attractive regions in southern Algeria. Gourara is a region of Algeria formed by a set of oases. Surrounded by the Grand Erg Occidental (to the North), the Touat and the Saoura (to the West) and the Tadmaït plateau (to the South and the East), an immense flat and stony expanse that separates it from the Tidikelt (Aïn Salah). Like the Touat (Adrar) and the Tidikelt, this region uses the Foggaras irrigation system (infiltration water collection system). The Grand Erg is also Beni Abbès, Guirzim, Kerzaz, Timoudi, the oases of Gourara and the proximity of the towns of Laghouat, Ghardaïa and Béchar. This apparently impassable barrier has always been crisscrossed by the caravans which make the connection between the oases disseminated in the waves of sand. The main towns, bordering the Grand Erg Occidental, are El Meniaa (also called El Goléa), Timimoun (Gourara) and Adrar (Touat).

This mountain range, covering an area of nearly 120,000 km, is reminiscent of the ruins of an ancient city. Listed as a UNESCO World Heritage Site in 1982 and a Man and Biosphere Reserve in 1986, the park has one of the world’s major collections of rock art, comprising more than 15,000 drawings and engravings. It is considered, to this day, to be the largest open-air museum in the world. Its main city is Djanet. This city, true pearl of Tassili, deserves its name which means Paradise. Its white buildings with blue doors, bordering streets enhanced with dark blue and gold lampposts, are a real invitation to rest. Its magnificent palm grove dominated by towering mountains is worth a look on its own.

Listed as a UNESCO World Heritage Site in 1987, the Hoggar volcanic massif, which has existed for more than three billion years, is an immense geological formation. It presents a most fascinating landscape with its hardened lava waves whose colors range from flaming yellow to black purple. The climate here is very hot in summer, and it can freeze on winter nights. It is still less extreme there than the rest of the Sahara, and the Hoggar is in fact an important refuge for certain animal and plant species. It is also the territory of the Tuareg, these blue men who are so welcoming to foreigners. The astonishing beauty of this volcanic relief invites mediation like Father Charles de Foucauld, a Christian priest who lived as a hermit in the middle of the Hoggar. 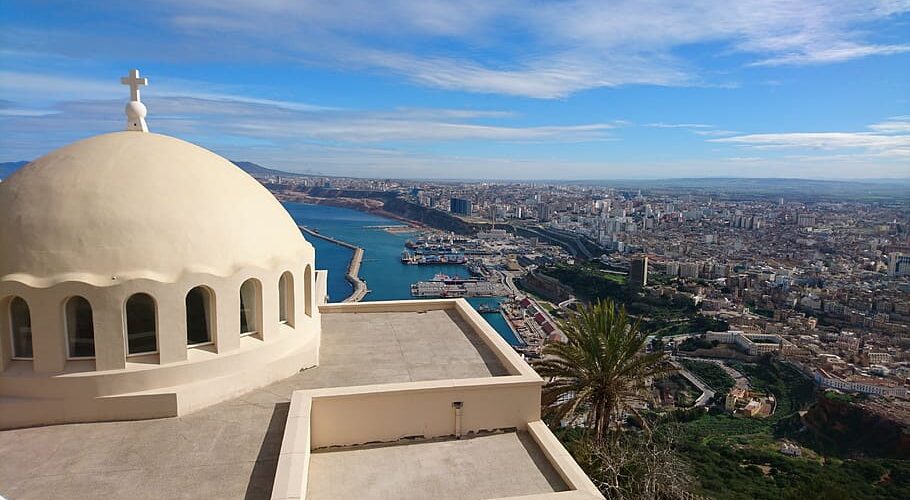 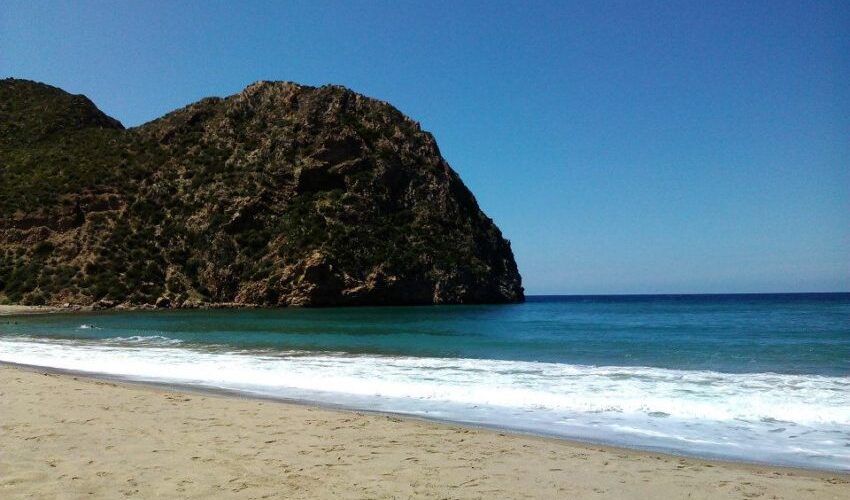 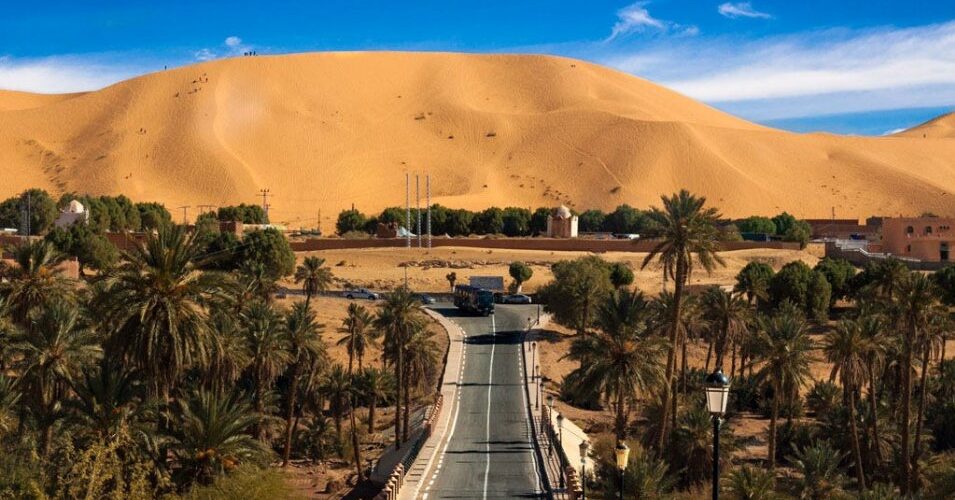 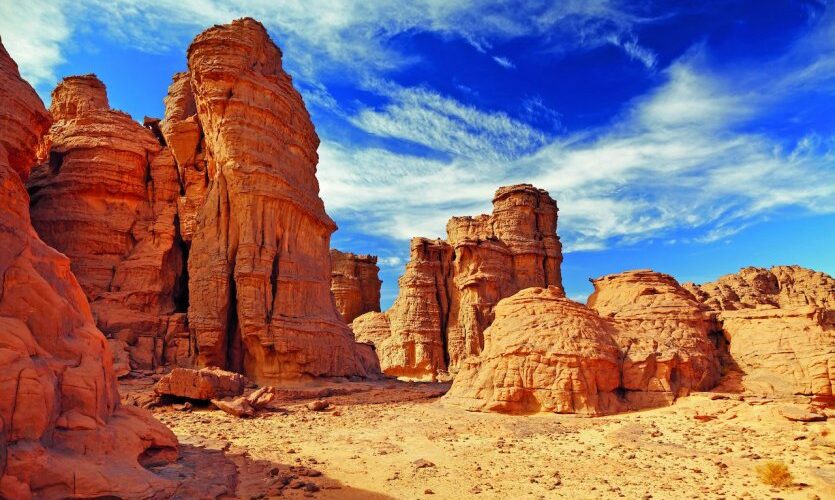