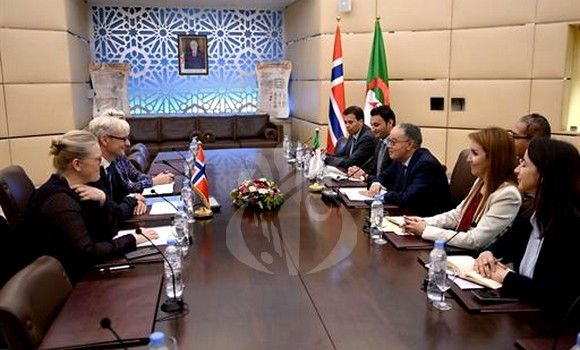 ALGIERS – Thursday, 20 October 2022 (APS) – State Secretary of Norway’s Foreign Affairs Ministry Erling Rimestad started on Wednesday a working visit to Algeria, at the invitation of Secretary General of the Ministry of Foreign Affairs and National Community Abroad Amar Belani, said the ministry in statement on Thursday.

“This visit comes to give concrete expression to the will, expressed several times by the two countries, to intensify the political dialogue between the Algerian officials and their Norwegian counterparts in order to promote the bilateral cooperation,” said the source.

“The exchanges between the two senior officials will enable examining key areas of the Algerian-Norwegian cooperation and prepare important bilateral events, notably the political consultations and the 20th session of the Nordic-African Foreign Ministers’ meeting that will be held in Algeria in the first quarter of 2023,” added the source.

“This visit will also be an opportunity to have an exchange on regional and international issues of common interest,” said the source.

As part of this visit, Erling Rimestad will be received by Minister of Foreign Affairs and National Community Abroad Ramtane Lamamra, as well as by Minister of Energy and Mines Mohamed Arkab,” according to the source.