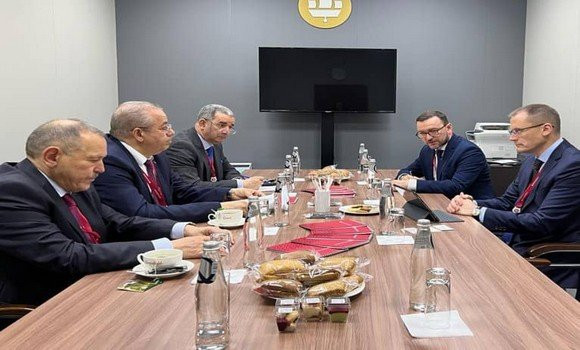 ALGIERS – Saturday, 18 June 2022 (APS) – On the sidelines of the St. Petersburg International Economic Forum 2022, the Minister of Industry, Ahmed Zeghdar attended the Russia-Africa Business Dialogue, during which Algeria had called for the integration of Africa, said Friday the ministry in a communiqué.

“Zeghdar participated in the dialogue alongside the Prime Minister of the Central African Republic and his counterparts from Egypt, Mali, and Zimbabwe, in addition to the representative of the Economic Community of Central African States (ECCAS) and representatives of important Russian financial and economic institutions including the vice-president of Gazprom-Bank as well as Algeria’s Ambassador to Moscow, Ismail Benamara and his assistants,” said the statement.

The meeting was chaired by the representative of the Russian Ministry of Foreign Affairs who delivered a speech on behalf of Russia’s FM, Sergei Lavrov, said the source.

The participants discussed “the major challenges of development in Africa in light of geopolitical developments in the world through a changing world order.”

“Zeghdar focused on the historic and positive role of Algeria in Africa and its continuing efforts to preserve the interests of Africa,” said the source.

The Minister of Industry made a presentation on the investment climate in Algeria booming after updating the investment legislation under the guidelines of the President of the Republic, Abdelmadjid Tebboune.

The participants emphasized “the need to intensify efforts to build Africa as a strong and integrated economy and avoid being a vulnerable economy that does not withstand the fluctuations induced by the tug of war and political conflicts.”

On the sidelines of the forum, Zeghdar met Friday in the presence of Algeria’s ambassador to Moscow, a delegation of Russian businessmen and investors wishing to invest in Algeria.

After recalling the legal framework of cooperation between the two countries in the field of industry, the Minister presented the new investment law “and the advantages, guarantees, and stability it provides, including the single window and industrial land,” said the source.

The meeting allowed Russian investors to show their “interest in Algeria as a promising investment destination.”