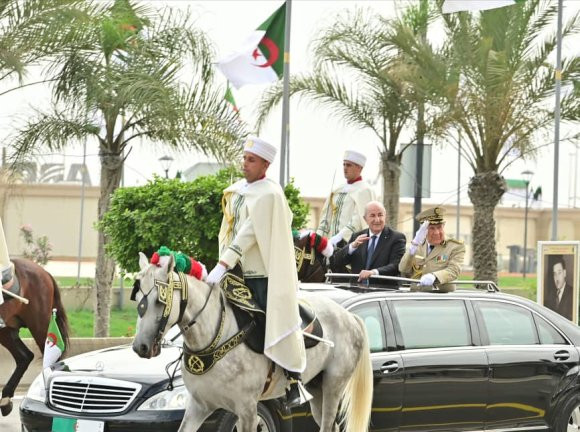 ALGIERS – Tuesday, 05 July 2022 (APS) – President of the Republic, Commander in Chief of the Armed Forces, Minister of National Defence, Abdelmadjid Tebboune, supervised Tuesday in Algiers, the launch of the grandiose military parade organized by the People’s Army (ANP) on the occasion of the celebration of the 60th anniversary of the recovery of national sovereignty.

Before listening to the national anthem, the President of the Republic, accompanied by Chief of Staff of the People’s National Army (ANP), General Said Chanegriha, inspected the groups participating in this parade and representing all the detachments of the ANP.

At the head of these groups are the musical troop and the cavalry of the Republican Guard, followed by a special group of mudjahideen of the National Liberation War and another of the cadets of the Nation.

The parade also includes a group of modernized tanks, support equipment and logistics, missile launchers, artillery, and combat vehicles, as well as an air formation consisting of several aircraft, in addition to ships and frigates.

Several heads of state and delegations of brotherly and friendly countries, who arrived Monday in Algiers, take part in this parade marking the 60th anniversary of the recovery of national sovereignty.