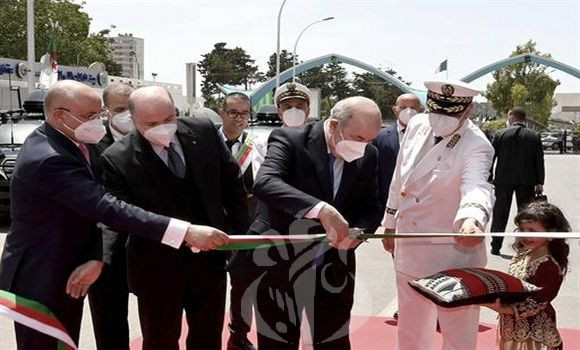 ALGIERS – Monday, 13 June 2022 (APS) – President of the Republic Abdelmadjid Tebboune on Monday opened the 53rd International Fair of Algiers, with the participation of more than 700 companies representing 20 countries, at the Exhibition Centre of Algiers.

President Tebboune was welcomed at the entrance of the Exhibition Centre by Prime Minister Aimene Benabderrahmane and the minister of Trade and Export Promotion, Kamel Rezig.

Members of the government and foreign diplomats accredited to Algeria attended the opening ceremony of the International Fair of Algiers, to run until June 17 under the slogan “For a Strategic Partnership.”

Visiting the various stands, Tebboune was provided with details on the event, which has brought together over 700 companies, 530 of them Algerian (147 state-owned and 383 private) and 187 foreign.