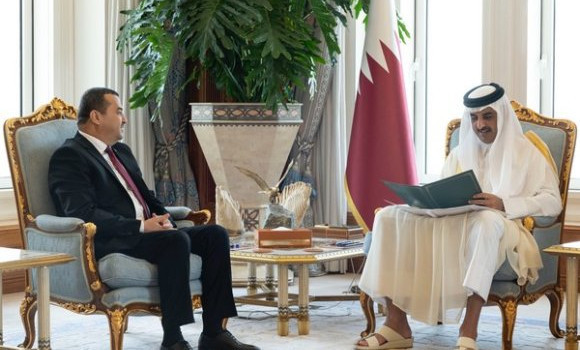 ALGIERS – Tuesday, 13 September 2022 (APS) – Minister of Energy and Mines Mohamed Arkab, was received Monday, in his capacity as the Special Envoy of the President of the Republic, Abdelmadjid Tebboune, by His Highness Prince of Qatar, a brotherly country, Tamim bin Hamad Al Thani, to whom he handed the letter of invitation sent by the President of the Republic to His Highness, the Emir of Qatar, to attend the Arab Summit scheduled for early November 2022 in Algiers, said the Ministry in a statement.

On this occasion, “the Minister conveyed to his Highness the Emir of Qatar the fraternal greetings of the President of the Republic.”

The two officials “discussed the various measures taken by Algeria to ensure the success of the upcoming Arab Summit, which is an opportunity to strengthen joint Arab action and meet the multifaceted challenges, particularly in the current situation,” added the statement.

“The President of the Republic relies on the participation of the State of Qatar in this Summit to boost Arab solidarity,” said Arkab.

“President Tebboune is willing to develop fraternal relations between the two countries,” he continued.

“His Highness, Sheikh Tamim bin Hamed Al-Thani entrusted the Minister with conveying his fraternal greetings to the President of the Republic, assuring him of his participation in the Arab Summit and of the full willingness of the State of Qatar to contribute effectively to its success and the implementation of its recommendations,” said the source.

The Emir of Qatar praised “the partnership level between the two countries, expressing the will of the State of Qatar to expand investment opportunities to different areas of common interest, notably energy and renewable energy, under the common will of both countries’ leaders and in the best interests of the two brotherly peoples.”