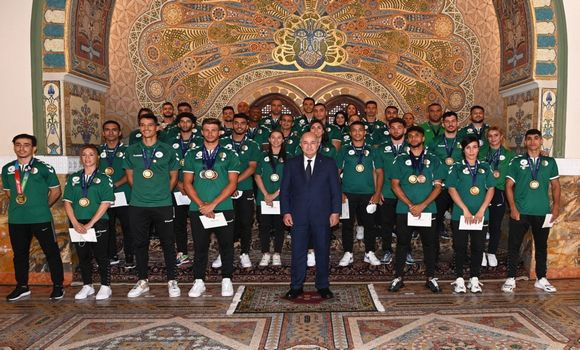 ALGIERS – Thursday, 14 July 2022 (APS) – President of the Republic Abdelmadjid Tebboune chaired Thursday at the Palace of People, in Algiers, a ceremony in honor of the athletes who offered Algeria medals at the Mediterranean Games that took place in Oran from 25 June to 6 July 2022.

On this occasion, President of the Republic handed certificates of gratitude and a financial reward to medalist athletes.

The ceremony was also marked by the presence of karateka Ayoub Helassa who won the gold medal in the Karate-do event of the 11th World Games of Birmingham (USA) and who offered this distinction to the President of the Republic.

The medalist athletes at the 2022 Mediterranean Games offered President Tebboune a jersey signed by all the athletes and printed “Algeria.”

President Tebboune took a family photo with all the athletes and the State’s top officials.

This ceremony, in honor of the Algerian athletes, is part of the policy of President Tebboune to promote and encourage the development of the national elite’s sport.

Some medalists at the Oran Mediterranean Games 2022 were absent at the ceremony because they were held back by obligations like the athletes currently in Oregon (USA) to take part in the World Athletics Championships.

The athletes honored are: