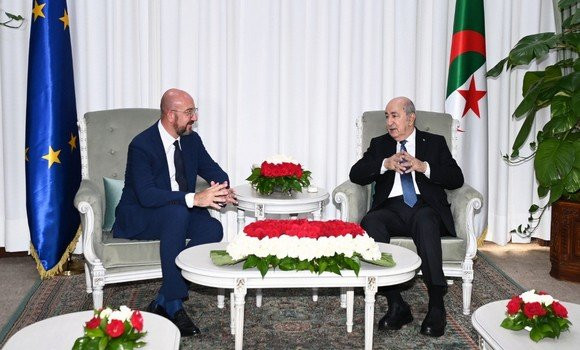 ALGIERS – Monday, 05 September 2022 (APS) – President of the Republic Abdelmadjid Tebboune on Monday, in Algiers, had one-on-one discussions with President of the European Council Charles Michel.

The talks took place at the presidency of the Republic, where an official welcome was given by President Tebboune to the President of the European Council.

Earlier on Monday, Charles Michel arrived in Algiers where he was welcomed by Prime Minister Aymen Benabderrahmane, accompanied by Minister of Energy and Mines Mohamed Arkab and Minister of Trade and Export Promotion, Kamel Rezig.

He later went to the Martyrs’ Memorial where he laid a wreath at the commemorative stone in memory of the martyrs of the glorious National Liberation War.

The President of the Council of Europe also visited the National Museum of the Mujaheed where he received explanations on the different stages that marked the history of Algeria.