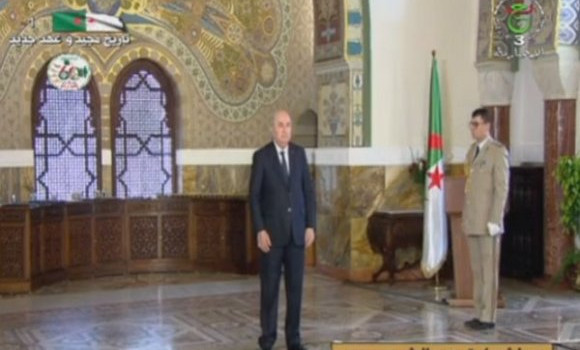 ALGIERS – Monday, 04 July 2022 (APS) – President of the Republic, Commander in Chief of the Armed Forces, Minister of National Defence, Abdelmadjid Tebboune chaired, Monday at the People’s Palace (Algiers), the annual ceremony of awarding grades and medals to officers of the People’s National Army (ANP).

Organized on the eve of the celebration of the 60th anniversary of the recovery of national sovereignty, the ceremony took place in the presence of senior state officials, including President of the Council of the Nation, Salah Goudjil, President of the People’s National Assembly (APN), Brahim Boughali, Prime Minister, Aïmene Benabderrahmane, and President of the Constitutional Court, Omar Belhadj.

During this ceremony President Tebboune promoted Chief of Staff of the ANP, Said Chanegriha to the rank of Army General.

In addition, medals were awarded to many military and civilian staff under presidential decrees dated June 30, 2022.

Upon his arrival at the People’ Palace, President Tebboune was received by Chief of Staff of the ANP, Army General Said Chanegriha, and Commander of the Republican Guard, Army General Benali Benali.

After listening to the national anthem at the entrance of the People’s Palace, the President of the Republic inspected a detachment of the Republican Guard who honored him, and greeted senior officers of the ANP.