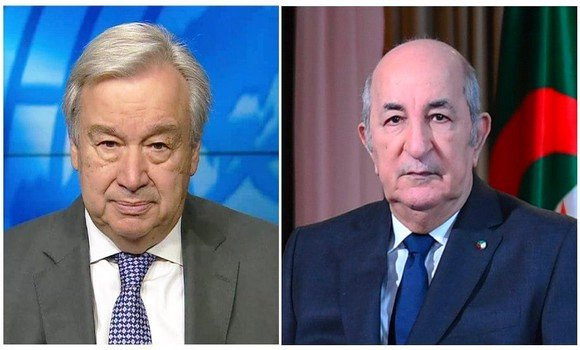 ALGIERS – Tuesday, 19 April 2022 (APS) – President of the Republic Abdelmadjid Tebboune called on Monday the international community to take urgent action to protect the Palestinian civilians and their holy places in accordance with the international law.

“The attacks perpetrated by the Israeli occupation forces against the sacredness of Al-Aqsa Mosque and the violence they exercise against the defenseless faithful reminds once again of the systematic violations of human rights and fundamental freedoms,” president of the Republic wrote in a letter sent to the United Nations Secretary General Antonio Guterres.

“These serious developments, which occur in a tense international context, exacerbate the instability in the Middle East region and further hinder the prospect of a fair and lasting solution to the Palestinian issue. These recurrent practices which occur every year in the holy month of Ramadan unveil the repression exerted by the occupation against the Palestinian civilians who, through their resistance and sacrifices, impose respect,” said President Tebboune.

“These unjustified tragic conditions emphasizes the necessity of a fair and peaceful solution, as affirmed by the international community continuously, through its commitment to the necessity of responding to the inalienable national rights of the Palestinian people, notably their right to establish their independent State-nation with Al-Quds as capital,” stressed President of the Republic.

“The worsening of the situation compels the international community to fully assume its responsibility, and must, through the United Nations and particularly the Security Council, take urgent action in order to provide the necessary protection to the Palestinian civilians and their holy places in accordance with the international law,” he underlined.

Such a move “requires warning the occupation of the consequences that could result from any measure likely to fuel tensions and continue the cycle of violence,” President Tebboune said in his letter.

“The United Nations’ credibility is often challenged through the repetitive acts of violence and the obstinate determination to impose the fait accompli, which increase the legitimate fears of peoples that believe in a fair and co-existent international community,” added President of the Republic.