PM: 2023 will be year of improved food, healthcare security

News PM: 2023 will be year of improved food, healthcare security 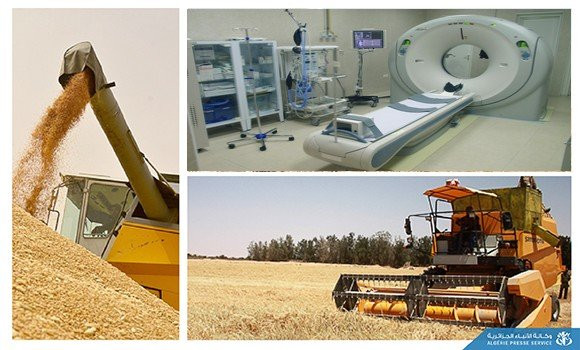 ALGIERS – Thursday, 20 October 2022 (APS) – Prime Minister, Aimene Benabderrahmane affirmed Thursday in Algiers that 2023 would be the year of improved food and healthcare security, which are “state’s top priority.”

“The year 2023 will be that of improving our food and healthcare security by ensuring the availability of staples, which are currently imported, and through the achievement of self-sufficiency and exporting of the surplus,” said Benabderrahmane at the opening ceremony of the Export Forum held under the patronage of the President of the Republic, Abdelmadjid Tebboune.

In this context, work is underway to “develop the local industry to ensure comprehensive coverage of domestic needs for staples that are currently experiencing large fluctuations on international markets and face a shortage in the future given the geopolitical changes on the international scene,” he said.

According to the Prime Minister, the Government aims to ensure comprehensive coverage (100%) of the country’s needs in sugar and table oil, and 80% of national demand for pharmaceuticals by the end of 2023, in accordance with the guidelines of the President of the Republic. These rates are “unprecedented”, he said, stressing that the achievement of  healthcare, energy, and food security is the “state’s top priority.”

“At a time when some countries with considerable resources are experiencing difficulties in meeting their needs, it is important for a continental country like Algeria to ensure the availability of food for its population and help neighboring countries that do not have the same capacity, “he continued.

“As part of the new economic approach, Algeria is moving to firm steps and more realistically towards the diversification of the national economy, through which we seek to lay the foundations of a new strong and sustainable national economy, free from dependence on oil revenues,” said the PM.

“Non-hydrocarbon exports are poised to reach US7 billion by the end of the current year as the Government works to increase this volume of exports to US10 billion in 2023,” assured Benabderrahmane.

“There was a pre-established belief that exceeding the threshold of US2 billion of non-hydrocarbon exports was difficult if not impossible, a rumor peddled by critics of national initiatives,” he stressed.

Moreover, the Government seeks to implement reforms to develop the sectors with significant export capacity, according to the Prime Minister.

“In addition, the new law on investment will be soon enacted, and a new strategy to promote non-hydrocarbon exports will be implemented before 2023,” said the PM.

He referred to the opening of bank branches in Europe and Africa before the end of the current year, stressing that the Bank of Algeria is working to remove the last obstacles to achieve this goal.

The PM gave instructions to the Director General of Customs to finalize the implementation of the new computer system of customs before the end of 2022 so that businessmen benefit from facilitations in the import of raw materials and export of finished products.