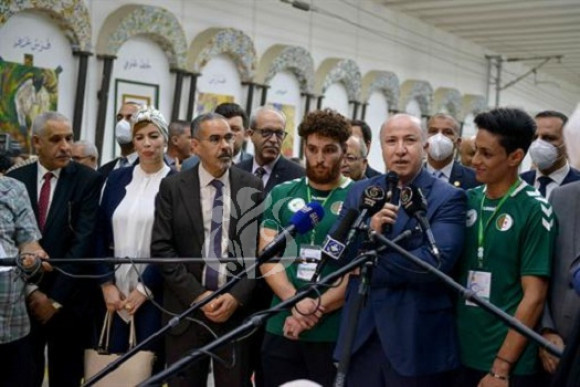 The Prime Minister greeted the first group of athletes, calling on them to do honour to the country.

The minister of Youth and Sports, Abderezzak Sebgag, the president of the Algerian Olympic and Sports Committee, Abderrahmane Hammad, and the presidents of sports federations attended the meeting.

Forty-seven years after hosting the 1975 Mediterranean Games, “we hope to relive the same joys and glories Algeria experienced during this edition, and hope that you can be the worthy successors of former champions, such as Salim Iles, Abdelmoumen Yahiaoui, Hassiba Boulmerka, Noureddine Morsli and so many others, to hoist the national flag high,” said Benabderrahmane.

The prime minister took the opportunity to recall the installation of the Higher Council for Youth, on Monday, by the President of the Republic Abdelmadjid Tebboune who affirmed “to hand the torch to the youth, the driving force of this nation.”

President Tebboune added that “it was time for young people to put their abilities at the service of the country.”

Hosting the Mediterranean Games, which coincides with the 60th anniversary of the recovery of national sovereignty, “is proof that our country can bring joy to this dear homeland and its great people,” he said, wishing the athletes “great success and more victories in fair competitions.”