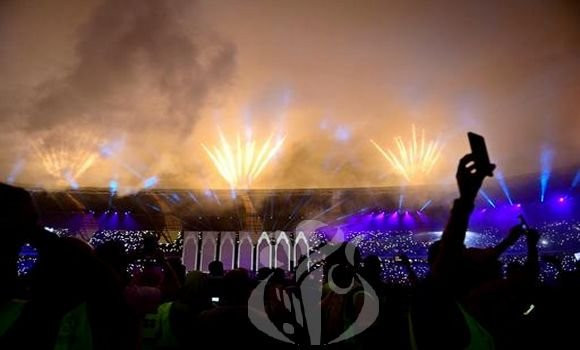 ORAN – Thursday, 07 July 2022 (APS) – After ten days of competition in Oran, the traditional closing ceremony of the 19th edition of the Mediterranean Games (JM) took place Wednesday evening at the stadium of the Olympic complex “Miloud-Hadefi,” with the presence of Prime Minister, Aïmene Benabderrahmane and members of his government.

The band of the Republican Guard was the first to enter the stadium to kick off the ceremony, which was attended by President of the Federal Democratic Republic of Ethiopia, Sahle-Work Zewde, as guest of honor.

The public, already on fire, was still enjoying a high-end show made of fireworks and pyrotechnic effects, before the Maestro Salim Dada to lead the orchestra, composed of 110 musicians, including 40 foreigners.

Then came the moment for the delegations that participated in these games to enter. The Algerian delegation, which has achieved its best performance in the history of the World Games, received a special welcome from the public who gave their voices to the famous refrain “one two three viva Algeria.”