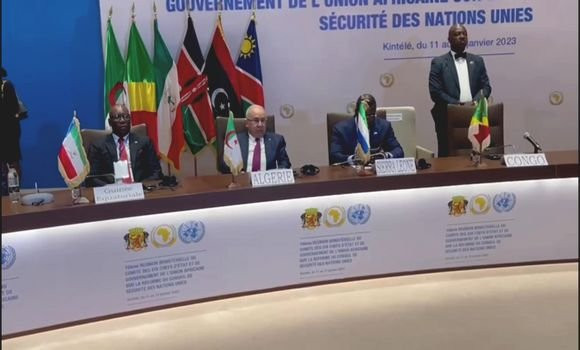 ALGIERS – Thursday, 12 January 2023 (APS) – Minister of Foreign Affairs and National Community Abroad, Ramtane Lamamra highlighted, Thursday in Brazzaville, the commitment of President of the Republic, Abdelmadjid Tebboune, to pursue efforts to achieve a concrete progress in terms of governmental negotiations aimed at reforming the UN Security Council and achieving a more representative, fairer and more balanced international order, said the ministry in a statement.

Taking part in Brazzaville in the work of the ministerial meeting of the Committee of Ten of the African Union (AU) on the reform of the UN Security Council, Lamamra welcomed, in his speech, “the strong support that the African position is receiving at the international level.

The meeting focused on the assessment of the progress made in the negotiation process on the reform of the Security Council, and this in light of efforts to promote the unified African position that emphasizes the need to allow the continent to obtain two permanent seats in the UN body, from three to five seats, in accordance with the content of the “Ezulwini Consensus” and “the Sirte Declaration.”

President Tebboune “is committed to working with his African brothers, leaders of the Committee’s member countries, to preserve this momentum and continue efforts to achieve a concrete progress in terms of government negotiations to reform the Security Council and achieve a more representative, fairer and more balanced international order, especially in the context of the fallout of the current international crisis that bears the beginnings of the formation of new power relations on the international scene, “said the head of Algerian diplomacy.