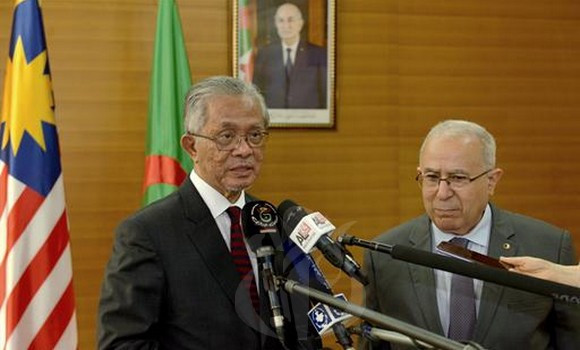 ALGIERS – Monday, 05 September 2022 (APS) – The minister of Foreign Affairs and National Community Abroad, Ramtane Lamamra, received on Sunday Malaysia’s Deputy Foreign Minister Dato Kamarudin Jaffar, who is on a working visit to Algeria, the ministry said in a statement.

“The two officials discussed the bilateral relations and how to give a fresh impetus to the historical relations between Algeria and Malaysia,” the statement said.

“They stressed the need to enhance the legal framework for cooperation between the two countries and revive the bilateral partnership mechanisms, including the Algerian-Malaysian Joint Commission, under the co-chairmanship of the Foreign ministers of the two countries.”

The two sides, during the discussions, agreed to “encourage the creation of an Algerian-Malaysian Business Council,” the statement said.

While welcoming the “regular coordination” between the two countries within the framework of the United Nations (UN), The Non-Aligned Movement (NAM), and the Organisation of Islamic Cooperation (OIC), the two sides exchanged views and analyses on a number of regional and international issues of common interest,” the statement concluded.