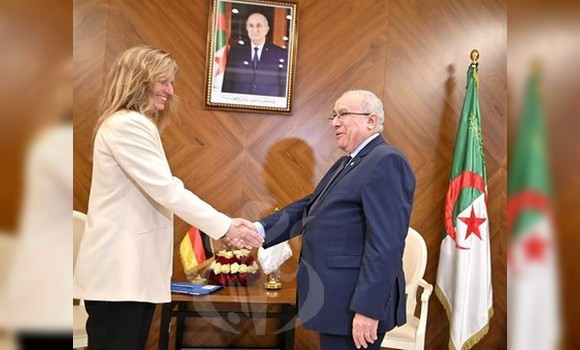 ALGIERS – Monday, 13 June 2022 (APS) – The minister of Foreign Affairs and National Community Abroad, Ramtane Lamamra, received Monday in Algiers Germany’s Deputy Foreign Minister Katja Keul, who is on a working visit to Algeria, the ministry said in a statement.

The visit is part of the strengthening of friendship and partnership relations between the two countries, which are celebrating this year the 60th anniversary of the establishment of diplomatic ties, the statement said.

The meeting was an opportunity for the two sides to “discuss the state of Algerian-German relations in different fields of cooperation, ahead of the coming bilateral events.”

They also tackled topical regional and international issues as well as the ways and means to step up partnership between Algeria and the European Union (EU), according to the statement.

At the end of the discussions, a cultural and scientific cooperation agreement was signed by the secretary general of the ministry of Foreign Affairs and National Community Abroad, Chakib Kaid, and Mrs Keul, the statement added.