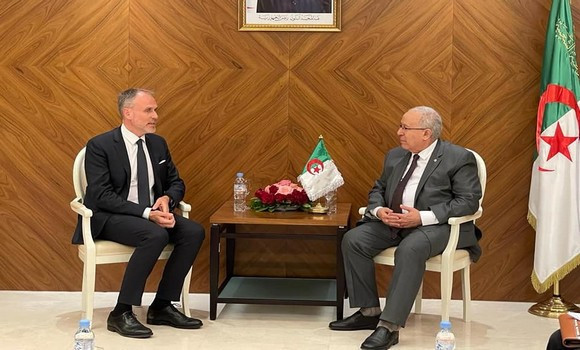 ALGIERS – Tuesday, 07 June 2022 (APS) – Minister of Foreign Affairs and National Community Abroad Ramtane Lamamra received Monday, in Algiers, the Executive Director of the Crisis Management Initiative “CMI”, coming under the Martti Ahtissari Peace Foundation, one of the main intellectual centers in Finland and the world, in terms of mediation for the settlement of conflicts at the international level, the Ministry of Foreign Affairs said in a statement.

“The meeting enabled the two sides to review the latest developments on the international scene, mainly the situation in Libya, Mali, Western Sahara, Palestine as well as the crisis in Ukraine and its repercussions on all countries,” said the source.

In this regard, “CMI’s Executive Director hailed the dominating role of Algeria on the settlement of conflicts, particularly in the region, welcoming by that means its positions of principle advocating the peaceful settlements, the path of dialogue and the non-interference in the countries’ domestic affairs, in addition to its role in defending the just causes and the interests of African and Arab countries and peoples,” added the source.

For his part, “Lamamra affirmed that Algeria is an influential player in all the moves aimed at strengthening peace and stability, notably in its geopolitical environment, through the revitalization of neighboring countries’ role in the settlement of conflicts in the region and the promotion of African solutions to African issues,” concluded the source.