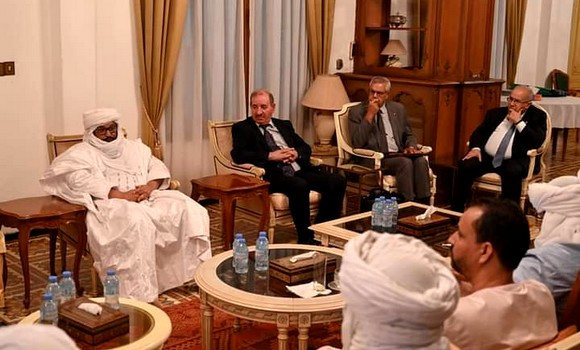 ALGIERS – Friday, 02 September 2022 (APS) – Minister of Foreign Affairs and National national community abroad, Ramtane Lamamra, was received Friday in by President of the Transition, Head of State of Mali, Colonel Assimi Goïta, as part of his working visit and friendship in the Republic of Mali, said the ministry in a statement.

“On this occasion, Minister Lamamra conveyed to the Malian Head of State a message from his brother President Abdelmadjid Tebboune on the historic relations of good neighborliness, cooperation and solidarity between the two brotherly countries,” said the source.

“Minister Lamamra took this opportunity to inform the Malian President of the results of the 18th session of the Bilateral Strategic Committee held the day before under the chairmanship of the Heads of Diplomacy of the two countries, which allowed to address a wide range of issues of common interest in order to further consolidate the strategic convergences Algerian-Malian,” the same source added.

In addition, “Minister Lamamra was received by Malick Diaw, President of the National Council of Transition and Abdoulaye Maiga, acting Prime Minister.