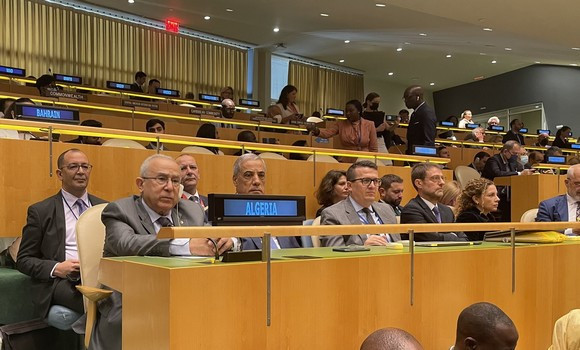 NEW YORK (United Nations) – Wednesday, 21 September 2022 (APS) – The minister of Foreign Affairs and National Community Abroad, Ramtane Lamamra, launched Tuesday at the headquarters of the United Nations in New York, the campaign for the promotion of Algeria’s candidacy to a UN Security Council non-permanent seat for the term 2024-2025, ahead of the elections to be held during the 77th General Assembly session on June 2023.

During the launch of the campaign, while taking part in the high-level segment of the 77th session of the UN General Assembly in New York (September 20-26), the head of the Algerian diplomacy was accompanied by Algeria’s permanent representative to the United Nations, Nadir Larbaoui, and the members of the Algerian delegation.

In this respect, panels promoting Algeria’s candidacy to the Security Council and the Human Rights Council were displayed in the halls of the UN.

In addition, a brochure highlighting the guidelines of President of the Republic

Abdelmadjid Tebboune in terms of foreign policy and the key events in the history of Algerian diplomacy were distributed to delegations participating in the General Assembly works.

The minister, while discussing with his counterparts, diplomats and media representatives at the United Nations, stressed that the next UN Security Council term will be an opportunity for our country to reiterate its principles and share its views about the issues on the Security Council’s agenda in relation to global peace and security.