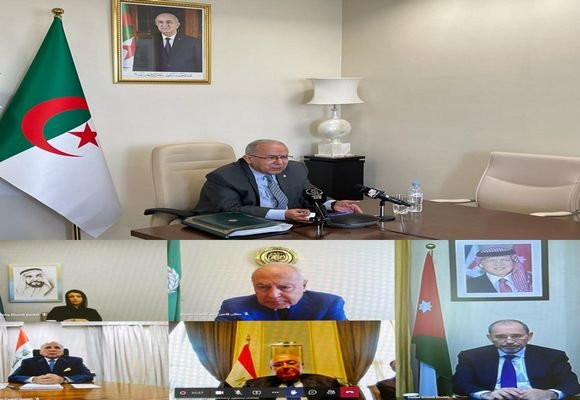 ALGIERS – Sunday, 05 June 2022 (APS) – The Minister of Foreign Affairs and National Community Abroad, Ramtane Lamamra, participated Sunday in a high-level ministerial meeting by videoconference on the crisis in Ukraine, the ministry said in a communiqué.

The FMs of the Group member countries (Egypt, Jordan, United Arab Emirates, Iraq, and the Kingdom of Saudi Arabia) and the Secretary-General of the Arab League, Ahmed Aboul Gheit attended the meeting.

The meeting focused on the crisis in Ukraine and the contribution of the Arab Group to the international diplomatic efforts aimed at reaching a peaceful solution. They also work to mitigate the impact of the crisis on Arab countries, particularly in terms of food security and energy,” said the source.

The meeting comes after the visit by the Arab Contact Group in early April to Moscow and Warsaw and the talks the group held with the Russian and Ukrainian FMs, said the source.

The Council of Ministers of the Arab League, which met in March in Cairo, had decided to set up an Arab Contact Group at the ministerial level to “discuss with the concerned parties the ways to find a diplomatic solution to the crisis in Ukraine.”