Lamamra on working visit to Libya 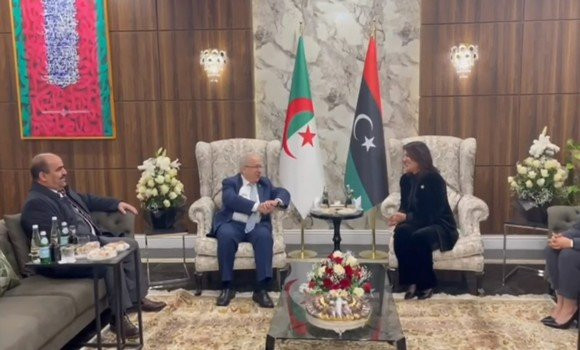 ALGIERS – Monday, 23 January 2023 (APS) – Minister of Foreign Affairs and National Community Abroad Ramtane Lamamra paid on Sunday a working visit to Libya where he had bilateral talks with Libyan top authorities and took part in the periodic consultation meeting of Arab Foreign Affairs Ministers, held in Tripoli, the ministry said in a statement.

At the beginning of his visit, which comes at the invitation of his Libyan counterpart Najla Al-Mangoush, Lamamra was received by the president of the Libyan Presidential Council Mohamed Younes Al-Menfi to whom he transmitted the greetings of President of the Republic Abdelmadjid Tebboune who reiterated “his commitment, in his capacity as current president of the Arab Summit, to working for the strengthening of the solidarity with brotherly country Libya and contributing to the efforts aimed to enable the Libyan sides to reach a peaceful solution likely to end the current crisis and ensure the restoration of the position of this brotherly and neighboring country at the regional and international levels,” according to the source.

Lamamra held also talks with his Libyan counterpart Najla Al-Mangoush with whom he discussed the Algerian-Libyan fraternal relations and prospects of their strengthening, in addition to issues of common interest at the continental level.

Lamamra’s participation in the consultation meeting of Arab Foreign ministers enabled discussing the implementation of the decision of the Arab Summit, held in November in Algiers, and the latest developments on the Arab scene.

“During this meeting, marked by the participation of representatives of the United Nations (UN) and the African Union (AU), the emphasis was placed on the evolution of the political process in Libya and ways to unify the UN and AU efforts in cooperation with the neighboring countries, in order to reach a consensus enabling the Libyan parties to achieve an inclusive national reconciliation and organize democratic elections that end the crisis once and for all,” said the source.

The meeting focused on the strengthening of the Arab joint action and the updating of its mechanisms, in accordance with the constructive recommendations adopted during the Arab Summit in Algiers at the initiative of President Tebboune.

On the sidelines of the works of the consultative meeting, Lamamra discussed with his Tunisian counterpart Othman Jerandi, the Qatari Minister of Foreign Affairs Soltan bin Saad Al-Muraikhi, as well as the special envoy of the UN Secretary General Abdoulaye Bathily.