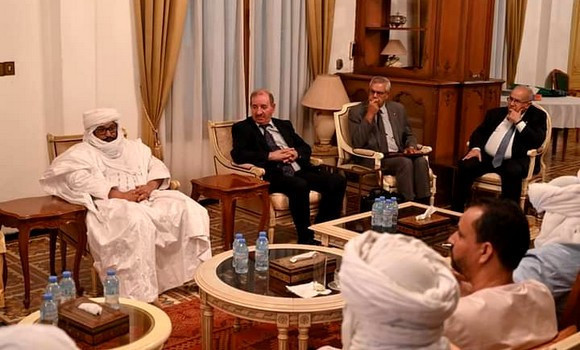 ALGIERS – Friday, 02 September 2022 (APS) – Minister of Foreign Affairs and National Community Abroad, Ramtane Lamamra met, Thursday, with representatives of the signatory movements of the Peace and Reconciliation Agreement in Mali, resulting from the Algiers process, said the ministry in a statement.

As part of the working visit and friendship he is conducting in the Republic of Mali, and on the eve of the holding of the 6th high-level session of the Monitoring Committee on the implementation of the Peace and Reconciliation Agreement in Mali, resulting from the Algiers process (CSA), Lamamra, held a consultation meeting with representatives of movements signatories to the agreement, said the source.

The meeting, which comes after the 18th session of the Strategic Bilateral Committee, held with the Malian government “has enabled to take cognizance of the views of the movements, thus allowing to complete the overall assessment on the status of implementation of the agreement and the prospects for its acceleration in favor of commitments made by the signatory parties at the last high-level decision-making meeting,” the source added.

On this occasion, “representatives of the movements have reiterated their commitment to the agreement as a cornerstone to promote factors of reconciliation and peace and preserve the stability and unity of this brotherly country,” concluded the source.