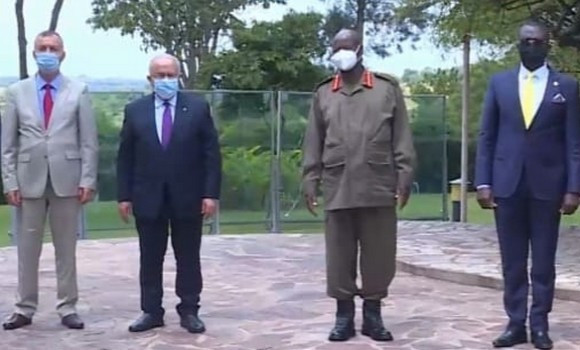 ALGIERS – Friday, 17 June 2022 (APS) – Minister of Foreign Affairs and National Community Abroad, Ramtane Lamamra, in his capacity as Special Envoy of President of the Republic, paid a working visit to the Republic of Uganda during which he was received in audience by Ugandan President Yoweri Museveni, said the ministry in a statement.

“In his capacity as Special Envoy of the President of the Republic, Abdelamdjid Tebboune, Minister of Foreign Affairs and National Community Abroad, Ramtane Lamamra, paid a working visit to the Republic of Uganda during which he was received by President Yoweri Museveni in his residence located in Rwakitura in the district of Kiruhura in the south-west of the country,” the source said.

On this occasion, “Minister Lamamra handed the Ugandan President a written message from his brother President Tebboune on the relations of brotherhood, cooperation and solidarity between the two countries,” the ministry said.

The two officials further discussed the prospects for strengthening bilateral cooperation,mainly in view of the new challenges imposed by recent developments on the international scene,” the source added.

In this regard, “President Museveni instructed Minister Lamamra to convey to his brother President Abdelmadjid Tebboune and through him to all the Algerian people the warm congratulations of Uganda on the occasion of the celebration of the 60th anniversary of the recovery of national independence, while stressing the importance of the values enshrined in this major event for Africa and the whole world.

Moreover, the two parties agreed “to work together and in close collaboration with the other Member States to strengthen the role of the Non-Aligned Movement to overcome the current tension in international relations and to promote international peace and security,” the source concluded.