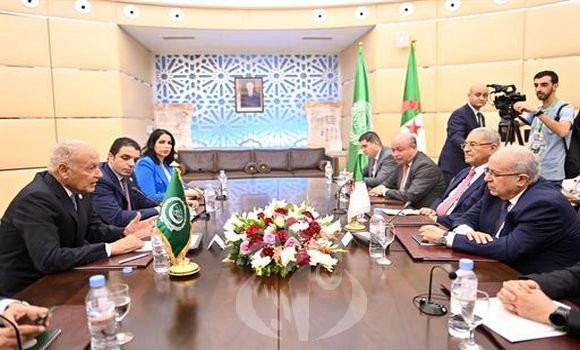 ALGIERS – Tuesday, 21 June 2022 (APS) – The minister of Foreign Affairs and National Community Abroad, Ramtane Lamamra, held Tuesday in Algiers a working meeting with the secretary general of the Arab League, Ahmed Aboul Gheit, with the participation of delegations representing the two sides, the ministry said in a statement.

The discussions, held at the ministry’s headquarters, focused on the preparations for the Arab summit, due to be held in Algiers on November 1st and 2nd, as well as international issues of common interest for the Arab world,” the statement said.

The secretary general of the Arab League praised “the efforts made by Algeria and the organizational ideas put forward for the Arab leaders to share Algeria’s celebration of the 68th anniversary of the Revolution (of November 1954) for national liberation and draw inspiration from this glorious history, to crystallize an ambitious vision living up to the aspiration of Arab peoples and effectively address the challenges posed by the current scene,” the statement said.

The two sides agree to “continue coordination to make a success of the event and a major milestone in the joint Arab action.”