Lamamra hands over message from President Tebboune to Iraqi counterpart 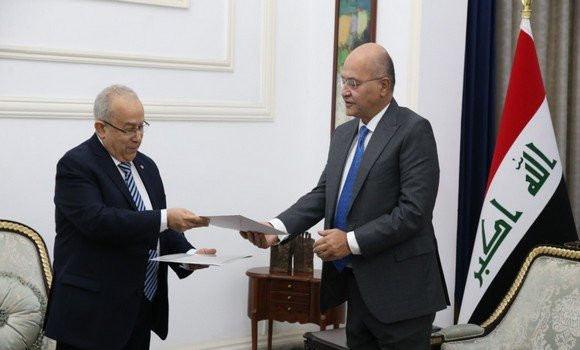 ALGIERS – Saturday, 23 July 2022 (APS) – Minister of Foreign Affairs and National Community, Abroad Ramtane Lamamra was received Saturday in Baghdad by Iraqi President Barham Salih, to whom he handed over a written message from the President of the Republic Abdelmadjid Tebboune, said a statement from the ministry.

On this occasion, Lamamra handed over to the Iraqi President “a written message from his brother, President Abdelmadjid Tebboune, and conveyed to him his sincere greetings, expressing his desire to further strengthen fraternal and historical relations that unite the two brotherly countries and mutually support their security and stability.”

For his part, President Barham Salih praised the depth of brotherly bilateral relations and coordination between the two countries in light of the convergence of their positions on all regional and international issues.

“President Barham Salih also asked Lamamra to convey his warm congratulations to his brother, President Tebboune, and to the Algerian people on the occasion of the sixtieth anniversary of the recovery of national sovereignty, stressing Iraq’s commitment to contribute qualitatively to the success of the Arab Summit, scheduled in Algiers, with a constructive and inclusive agenda likely to open up broad prospects for joint Arab action,” the statement continued.