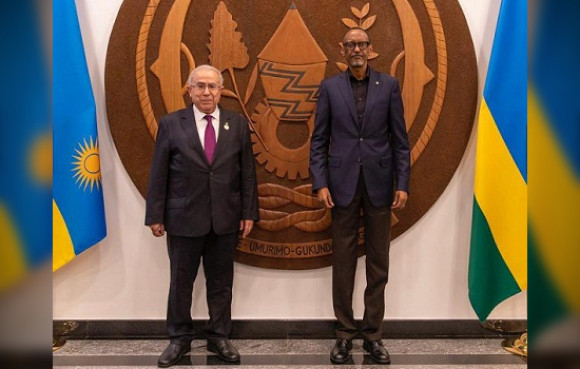 ALGIERS – Saturday, 18 June 2022 (APS) – The minister of Foreign Affairs and National Community Abroad, Ramtane Lamamra, delivered Saturday, in Kigali, a message from President of the Republic Abdelmadjid Tebboune to the head of State of Rwanda, Paul Kagame, the ministry said in a statement.

As part of a working visit to the Republic of Rwanda as a special envoy of the president of the Republic, the minister of Foreign Affairs and National Community Abroad, Ramtane Lamamra, was received in audience by President Paul Kagame at the presidential palace in Kigali, according to the statement.

Foreign Minister “Lamamra delivered to the Rwandan president a written message from his brother, President Abdelmadjid Tebboune, reiterating his desire to continue, together with him, the efforts to boost the ties of friendship, cooperation and solidarity between the two countries.”

“Thanking his brother, President Tebboune, for his feelings of solidarity and fraternity,” President Kagame “expressed his best wishes for more progress and prosperity for Algeria and its people on the occasion of the celebration of the 60th anniversary of the recovery of national independence.”

The audience, attended by Rwanda’s Foreign Minister Vincent Biruta, was an opportunity to “highlight the common determination of the leaders of both countries to build exemplary relations and contribute together to the implementation of the continental agenda for peace, security, integration and prosperity.”