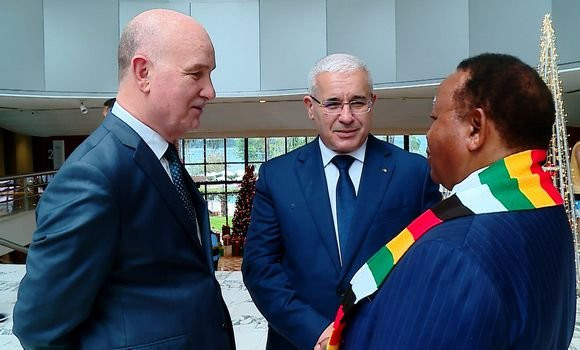 ALGIERS – Sunday, 01 January 2023 (APS) – The speaker of the People’s National Assembly Brahim Boughali met with several African officials in the Brazilian capital Brazilia, on the eve of his participation in the investiture ceremony of the new Brazilian President Lula Da Silva on Sunday, the Assembly said in a statement.

Boughali held talks on Saturday with Malian Prime Minister Choguel Kokalla Maïga to whom he conveyed the greetings of his counterpart Aimene Benabderrahmane.

He congratulated Maiga on the occasion of the resuming his duties and his recovery, saying that “Mali needs his experience and competence in the current situation.”

On this occasion, Boughali reaffirmed “Algeria’s unfailing support to the implementation of the agreement on peace and reconciliation stemming from Algiers process and its commitment to the unity and territorial integrity of this neighboring and brotherly country.”

For his part, Maiga welcomed “the trust relationship between the two countries and peoples,” entitling Algeria “to assume the mediation in the settlement of the crisis in northern Mali.”

He said he is convinced that the bilateral relations will further develop, driven by “a will rooted in the Malian State and people.”

In this regard, the Malian Prime minister affirmed “the continuation of dialogue with the parties signatories to the 2015 agreement,” affirming that the aforementioned agreement “will enable transcending all the interpretations that some sides try to exploit to spread discord between the government and its citizens in the north.”

Boughali met also with Zimbabwean Minister of Foreign Affairs Frederick Shava with whom he discussed “ways to develop the bilateral relations, notably in fields of common interest.”

The meeting enabled the two sides to stress “the importance of consultations and cooperation to strengthen the peace and security process and development in the best interests of the African peoples.”

The meeting enabled the two sides to stress “the importance of consultations and cooperation to strengthen the peace and security process and development in the best interests of the African peoples.”