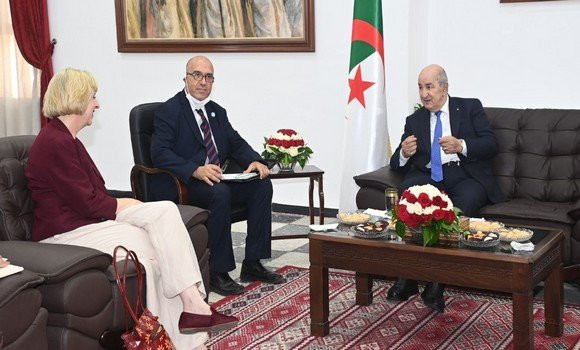 ALGIERS – Tuesday, 14 June 2022 (APS) – President of the Republic Abdelmadjid Tebboune called Monday, at the Exhibition Center (Algiers), to intensify cooperation and exchange of experiences between the Algerian and American businessmen, emphasizing the importance of benefitting from the American experience in the field of startups.

After the official inauguration of the 53rd International Book Fair of Algiers (FIA), President Tebboune visited the stand of  the United States of America (guest of honor).

Accompanied by US ambassador to Algiers Elizabeth Moore Aubin, President Tebboune had an exchange with the American operators, emphasizing the importance of cooperation and exchange of experiences between the Algerian and American businessmen in the field of startups.

While announcing the forthcoming organization of a “Forum of startups,” President Tebboune pointed out the moves for the opening, “before the end of current year,” of an Algiers-New York air service to facilitate the contacts between the two countries’ businessmen.

President of the Republic insisted on the intensification of cooperation in the agricultural field, affirming the launch of an “ambitious programme for Saharan land reclamation.”

At the stall of the plane manufacturer C-130, President Tebboune broached the possibility of purchasing or chartering fire-fighting planes.

“It is urgent, the purchase could be concluded immediately,” he affirmed.

President Tebboune expressed the hope that the planes in question are equipped to fight against the fires by using sea water.

Affirming that the work with the American partner “is ongoing,” he said that the American equipment purchased by Algeria, until-then, is of a good quality.

During his visit to the American stand, President Tebboune received US ambassador to Algeria Elizabeth Moore Aubin. The audience took place in the presence of the Principal Private Secretary Abdelaziz Khellaf and Minister of Industry Ahmed Zeghdar.

President Tebboune visited then the stand devoted to the national companies, including the Directorate of Military Manufacturing, where he welcomed the efforts of the military institution to increase the integration rate.

In this respect, he insisted on the urgent need to continue efforts to take up this challenge through “the development of subcontracting at the national level with the involvement of the greatest possible number of Algerian companies and the establishment of partnerships with foreign companies to develop industrialization, given that Algeria has the means of payment and it is important to preserve its credibility.”

When visiting the national companies specialized in the electronics and appliance industries, President Tebboune insisted on the necessity of meeting “the quality and security standards” in the energy transition.