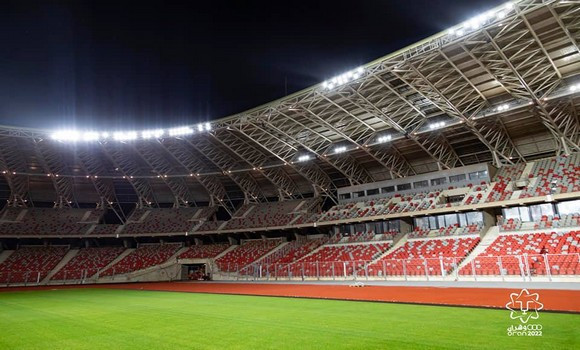 ORAN – Saturday, 25 June 2022 (APS) – The kick-off of the 19th Mediterranean Games of Oran (June 25-July 6), will be given officially, by President of the Republic, Abdelmadjid Tebboune, Saturday evening at the stadium of the new Olympic Complex of Oran, named after late international player Miloud Hadefi, Inaugurated last Thursday by Abdelmadjid Tebboune, this Olympic high standard complex, equipped with modern sports facilities, demonstrates  Algeria’s willingness to receive its guests in the best conditions, as called  for by the president of the Republic in multiples occasions.

The opening ceremony, which promises to be grandiose and colorful, will be marked by the presence of several guests, as well as major political and sports personalities, like Emir of the State of Qatar, Sheikh Tamim Ben Hamad Al-Thani, guest of honor, as well as representatives of several international sports federations and the International Olympic Committee (IOC).

The ceremony will recall the depth and historical roots of Algeria and Algerians, as an influential entity in the Mediterranean and its contribution in this field, said Samir Dada, President of the Commission of the opening and closing ceremonies of the Oran’s Mediterranean Games.

It will also be animated by a symphony orchestra made up of hundred musicians, and will also include artistic movements on an area of 9,000 square meters and 500 drones will be used for this purpose, in addition to a sound and light show and pyrotechnics.