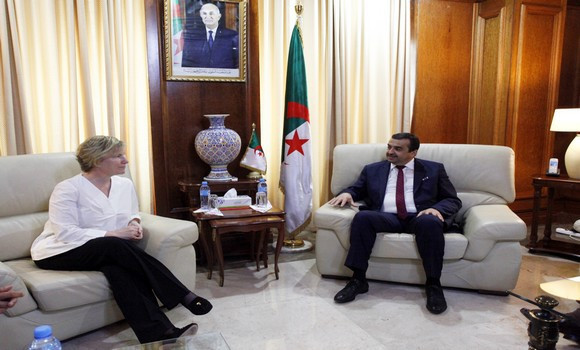 ALGIERS – Wednesday, 07 September 2022 (APS) – The minister of Energy and Mines, Mohamed Arkab, received Tuesday Dawn Summers, the Chief Operating Officer (COO) at the company Wintershall Dea AG for the EMEA (Europe, Middle East and Africa) Region, with whom he discussed the strengthening of cooperation and partnership in hydrocarbons, the ministry said in a statement.

During the meeting held at the ministry’s headquarters, “the discussions between the two sides focused on the development and strengthening of cooperation and partnership in hydrocarbons between the Group Sonatrach and the company Wintershall.

The two sides described relations between them as excellent, tackling the prospects for enhancing them, according to the statement.

The two parties also discussed investment and cooperation opportunities in hydrogen development and transport, hydrocarbon transport as well as carbon capture and storage,” the ministry said.