Algeria hosts important Roman and Islamic historic sites, seven of them are included on the country’s UNESCO World Heritage list: Djemila, Timgad, Kalaa Beni Hammad, Tipasa, the Casbah of Algiers, the M’Zab Valley, and the Tassili. 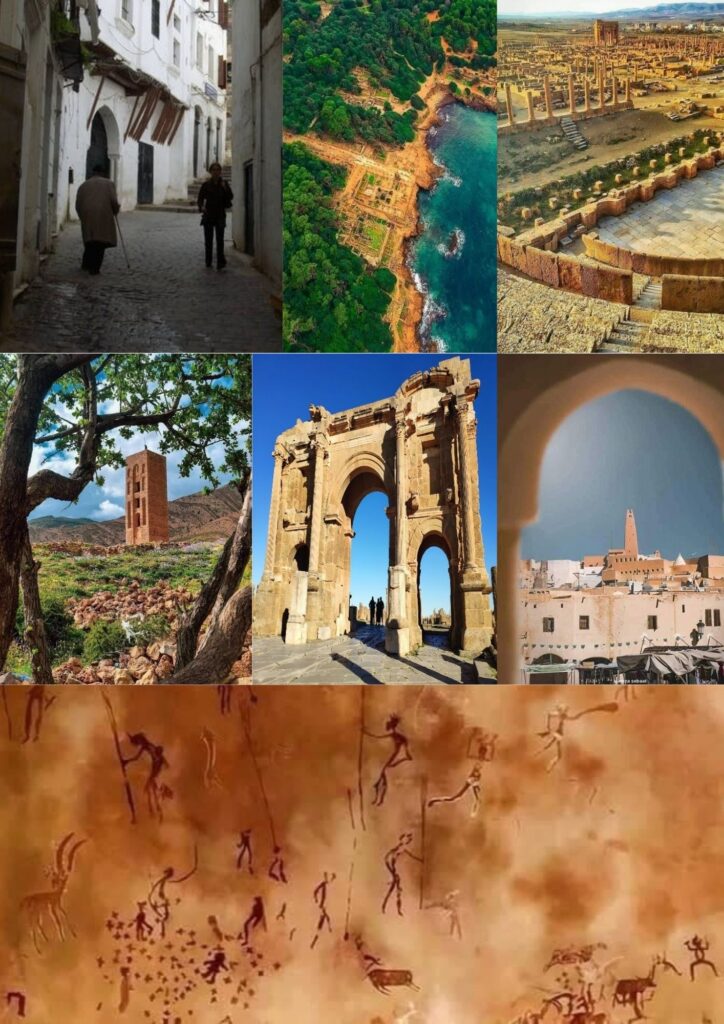 1. Kalâa of Béni Hammad/W. M Sila (1980): Located in a mountainous site of extraordinary beauty, a few dozen kilometres from M’sila, the ruins of the first capital of the Hammadid emirs, founded in 1007 and demolished in 1152, provide an authentic picture of a fortified Muslim city. The mosque, whose prayer room has 13 aisles with eight bays, is one of the largest in Algeria. 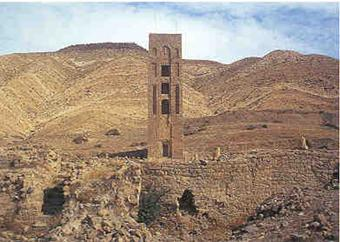 2. Djemila/W. Setif (1982): Djemila, or Cuicul, situated at an altitude of 900 m, a few tens of kilometres from Setif, with its forum, temples, basilicas, triumphal arches and houses, is a remarkable example of Roman town planning adapted to a mountain location. 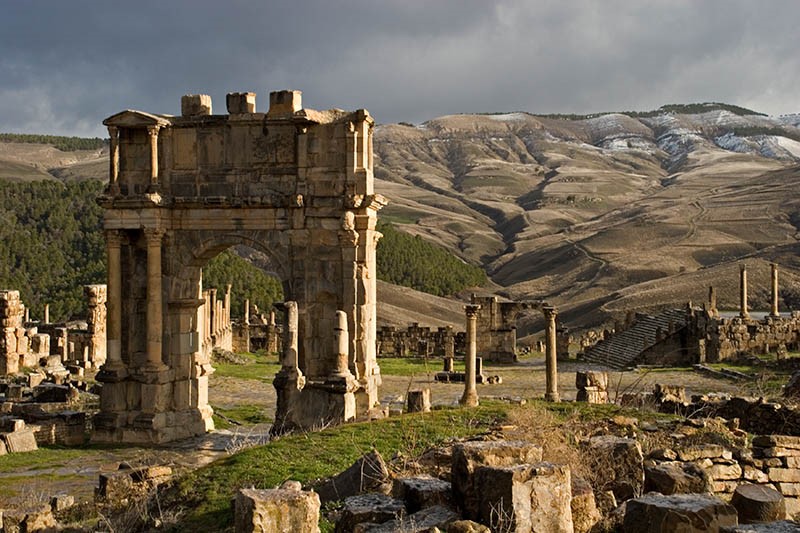 Located at the edge of the Ferdjioua mounts, it was founded in 96 by the emperor Nerva and subjected to the authority of the imperial legate of Numidia. 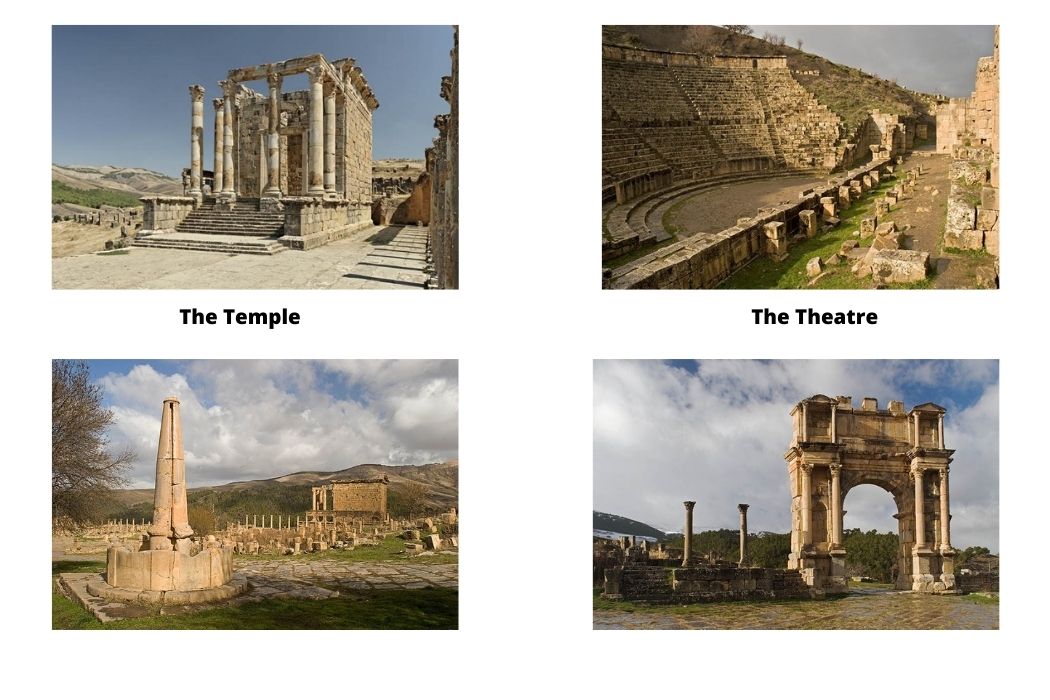 3. Timgad/W. Batna (1982): Timgad lies on the northern slopes of the Aurès Mountains near Batna and was created as a military colony by the Emperor Trajan in AD 100. With its square enclosure and orthogonal design based on the cardo and decumanus, the two perpendicular routes running through the city, it is an excellent example of Roman town planning. 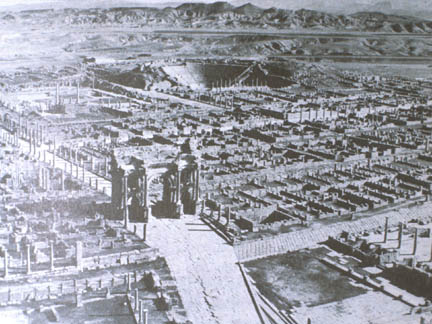 It was a capital of Donatism in the 4th century. The vandals occupied it in the 5th century.

The city presents some remarkable monuments:

4. Tipaza (1982): On the shores of the Mediterranean, Tipasa, former Punic counter, was occupied by Rome, which made it a strategic base for the conquest of the Mauritanian kingdoms. It includes a unique set of Phoenician, Roman, early Christian and Byzantine remains, bordering with indigenous monuments, such as the tomb of the Christian (Kbor Er Roumia), the great royal mausoleum of Mauritania. 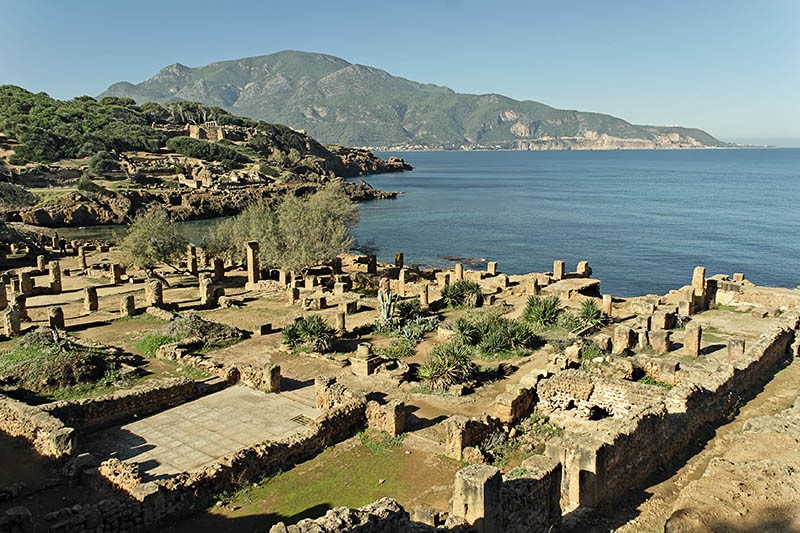 The city is situated about 70 kilometres South East of Algiers. Under the political and cultural control of Carthage, it became a prosperous city. 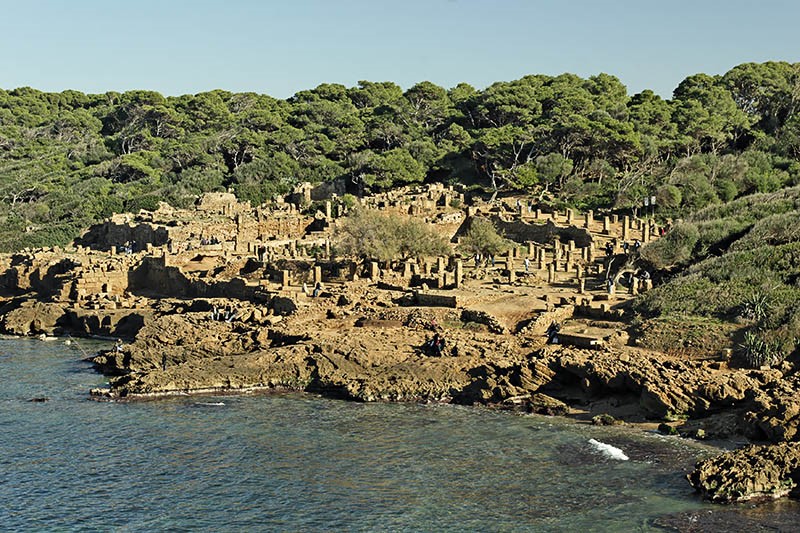 Its most remarkable monuments are the great basilica, the main hill of the forum with the capitol, the oriental funerary area…. 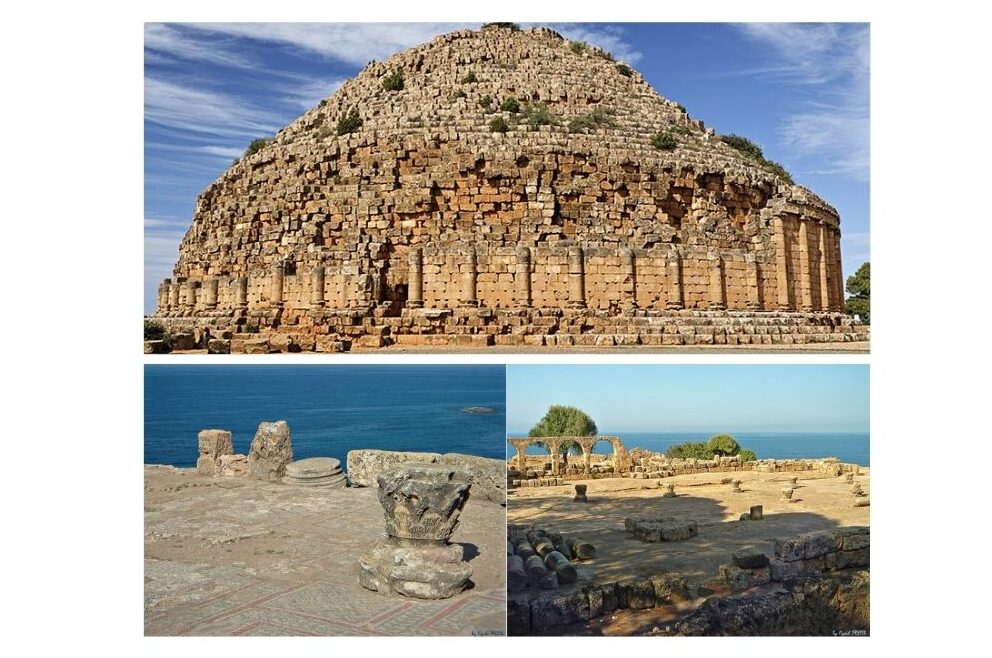 5.The casbah of Algiers (1992): One of the finest coastal sites on the Mediterranean, overlooking the islands where a Carthaginian trading-post was established in the 4th century BC, the Kasbah is a unique kind of medina, or Islamic city.

The inside of casbah’s house

6. Tassili N’Ajjer /W.Illizi (1982): Located in a strange lunar landscape of great geological interest in Illizi province (wilaya d’Ilizi), this site has one of the most important groupings of prehistoric cave art in the world. More than 15,000 drawings and engravings record the climatic changes, the animal migrations and the evolution of human life on the edge of the Sahara from 6000 BC to the first centuries of the present era. The geological formations are of outstanding scenic interest, with eroded sandstones forming ‘forests of rock’. The site covers an area of 7,200,000 ha. 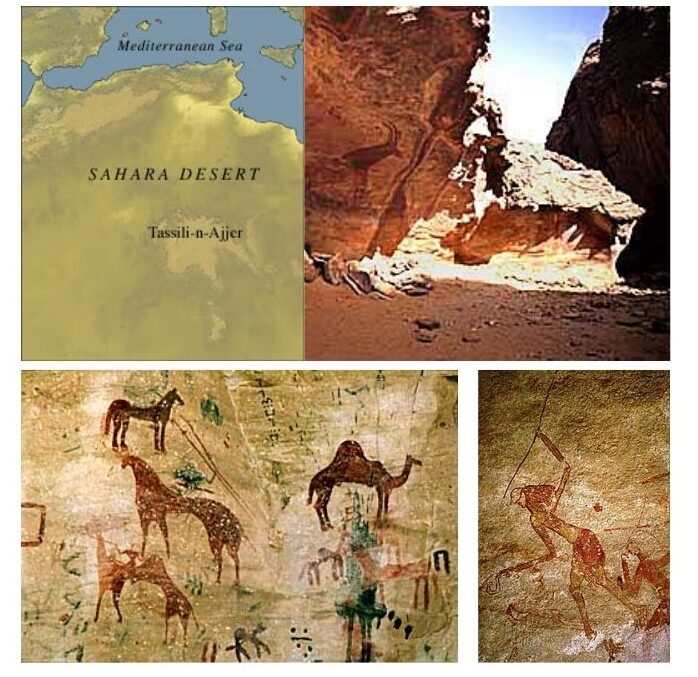 7. The M’Zab Valley/W.Ghardaia (1982): The landscape of the M’Zab valley in Ghardaïa, created in the 10th century by the Ibadites around their five ksour (fortified cities), has been preserved intact. Simple, functional and perfectly adapted to the environment, the architecture of M’Zab was designed for community living, while respecting the structure of the family. It is a source of inspiration for today’s urban planners.

In 2002, Algeria submitted requests for six other Algerian sites with a view to their inscription on the UNESCO list. These are: