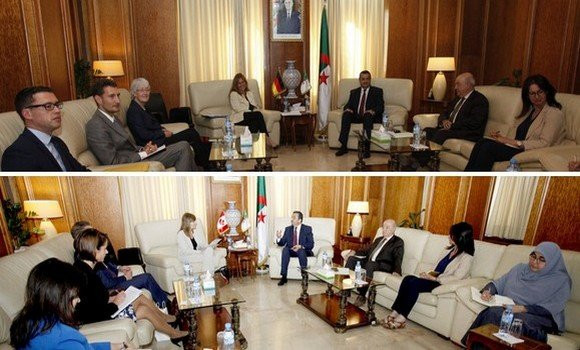 Ways of cooperation and investment between Algeria and each of these two countries were discussed during these meetings.

In a statement to the press following his meeting with Keul, Arkab said that he had discussed “the means of setting up a strategic partnership between the two countries within the framework of the exchange of technologies, particularly in terms of development of renewable energy and hydrogen in Algeria”.

The Minister announced “the execution, on a trial basis, of a hydrogen project in Algeria with German companies, which will be followed by an industrial project for the production of energy from hydrogen”.

Focus was also placed, during this meeting, on the support to be provided by the German hydrocarbon companies for the development of Algerian production, he underlined, adding that “agreements will soon be concluded for this purpose”.

For her part, Keul said that “this meeting made it possible to discuss the strengthening of cooperation between the two countries”, highlighting “Algeria’s potential in the field of solar energy”.

German Minister of State claimed to have discussed the prospects for a win-win partnership between Algerian companies and their German counterparts who, according to her, hold “technology in the field of renewable energy, in particular green hydrogen”.

In addition, Arkab discussed with the Canadian Associate Deputy Minister of Foreign Affairs the relations of cooperation and partnership between the two countries in the field of energy and mines as well as business opportunities and investment prospects in Algeria.

He presented the content and objectives of the new law on hydrocarbons for the revival of research activities and exploitation of hydrocarbons in Algeria.

The two parties also discussed opportunities for cooperation and investment in the mining sector in Algeria, including exploration, mapping, exploitation and production of mineral substances.

The Canadian official expressed the wish to see Canadian mining companies participate in the development of new mining projects in Algeria, with a sharing of Canadian expertise and know-how in the matter.