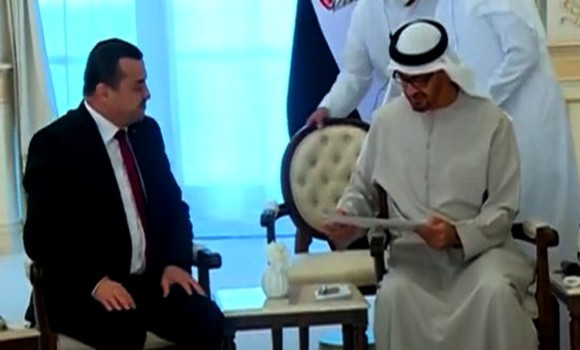 ALGIERS – Tuesday, 13 September 2022 (APS) – Minister of Energy and Mines Mohamed Arkab on Tuesday was received in Abu Dhabi, as a special envoy of president of the Republic Abdelmadjid Tebboune, by the president of the United Arab Emirates (UAE), Sheikh Mohammed bin Zayed Al Nahyan, to whom he handed over an invitation from President of the Republic to attend the Arab Summit Algeria will host early November, the ministry said in a statement.

“As part of the trip he is making to several Gulf States as special envoy of president of the Republic Abdelmadjid Tebboune, the minister of Energy and Mines, Mohamed Arkab, was received in audience today, in Abu Dhabi, by His Highness Sheikh Mohammed bin Zayed Al Nahyan, the president of the brother country of the United Arab Emirates,” the ministry said in a statement.

During the audience, “Arkab handed over an invitation from president of the Republic to his brother, His Highness Sheikh Mohammed bin Zayed Al Nahyan, to take part in the works of the 31th ordinary session of the Council of Arab League at the level of the Summit to be held in Algiers on November 1st and 2nd.”

“The minister conveyed to His Highness the fraternal greetings of the President of the Republic and his conviction that the United Arab Emirates will among the active participants, for the success of this major event that aims to boost cohesion and unity among Arab countries and to give a fresh impetus to the mechanisms of the joint Arab action, especially in the current international context marked by the multiples crises affecting the Arab nation,” the statement added.

His Highness Sheikh Mohammed bin Zayed Al Nahyan confirmed his personal participation in the Arab Summit of Algiers, expressing the United Arab Emirates’ willingness to work on several levels to ensure the success of this major Arab event, expressing wish that the Summit’s conclusions would be commensurate with the challenges and meet the expectations of the Arab peoples, according to the statement.