Arab Summit: 24 clauses adopted by ESC at level of ministers 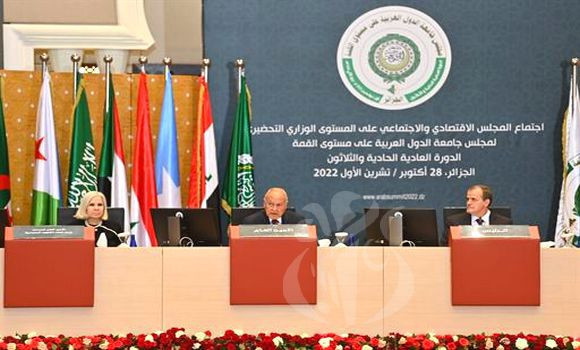 ALGIERS – Friday, 28 October 2022 (APS) – The Economic and Social Council of the Arab League (ESC) adopted Friday, at the end of a meeting at the level of ministers in Algiers, 24 clauses to be submitted to the Arab Summit that will take place November 1-2 in Algiers, the minister of Trade and Export Promotion, Kamel Rezig, said.

In a news conference following the meeting, Rezig said the 24 clauses adopted “unanimously” after a constructive discussion” include several recommendations on “important and sensitive” socio-economic issues, “especially Arab food security.”

They also include “bold” recommendations to revive the Great Arab Free Trade Area (GAFTA) and speed up the creation of the Arab Customs Union.

In reply to a question on trade among Arab countries, Rezig admitted that the level of Arab commercial exchange is low, despite the establishment of the GAFTA.

He explained the current situation by “undisclosed non-customs constraints.”

Speaking on the same occasion, the deputy secretary general and head of the Social Issues Department at the Economic and Social Council of the Arab League, Haifa Abu Ghazaleh, said the clauses to be submitted to the Summit are related to Arab citizens’ daily life marked by the impact of the Covid 19 pandemic and the repercussions of geostrategic crises.

In this respect, she announced that the ESC will set up a mechanism forcing the Arab member countries to implement the decisions relating to the Gafta.