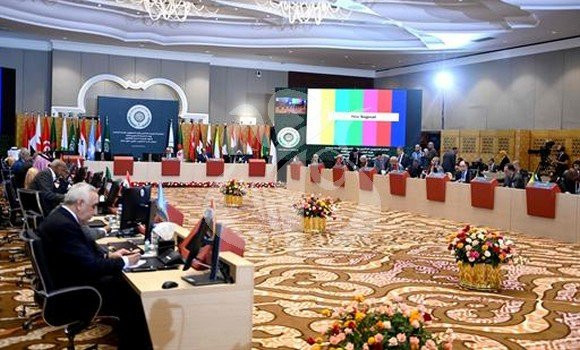 ALGIERS – Wednesday, 26 October 2022 (APS) – The works of the Council of the Arab League, at the level of permanent delegates and senior officials, in preparation for the meeting of foreign ministers, kicked off on Wednesday at Abdelatif Rahal International Conference Centre (CIC), ahead of the 31st  Arab Summit scheduled for November 1-2, in Algiers.

On this occasion, Permanent Representative of Algeria to the United Nations, Ambassador Nadir Larbaoui, took over the presidency of the 31st Arab Summit, replacing Ambassador Mohamed Ben Youcef, Permanent Delegate of Tunisia to the League of Arab States, whose country chaired the 30th Arab Summit.

“I am “fully confident” that Algeria, together with the other Arab countries, will continue its efforts to ensure the unity of the ranks concerning the first Arab cause in order to put an end to the suffering of the Palestinian people and to the policies of aggression of the occupation authorities,” said the Tunisian delegate in his opening statement.

“We welcome Algeria and commend its generous efforts and success in bringing the Palestinian brothers together,” he said.

“The sources of tension in our Arab region and the persistence of armed conflicts are a source of concern. They require joining efforts to resolve crises and find political solutions to conflicts and divisions within some of our countries, in order to achieve security and strengthen the factors of stability in our countries and societies and to protect them from foreign intervention,” added Ben Youcef.

For his part, Larbaoui praised the efforts made by the Tunisian Republic during its presidency of the previous Arab Summit. Welcoming once again Algeria’s guests to their second country, he recalled that this meeting is being held as “we are about to celebrate the 68th anniversary of the outbreak of the National Liberation War, a precious date to all Arab citizens.”

Larbaoui hopes that it would be “a consensual summit based on the common principles and reflecting the aspirations of our peoples for greater solidarity, cohesion and integration.”