Algerian music is known for the diversity of its styles and the richness of its repertoire. It consists of different genres: 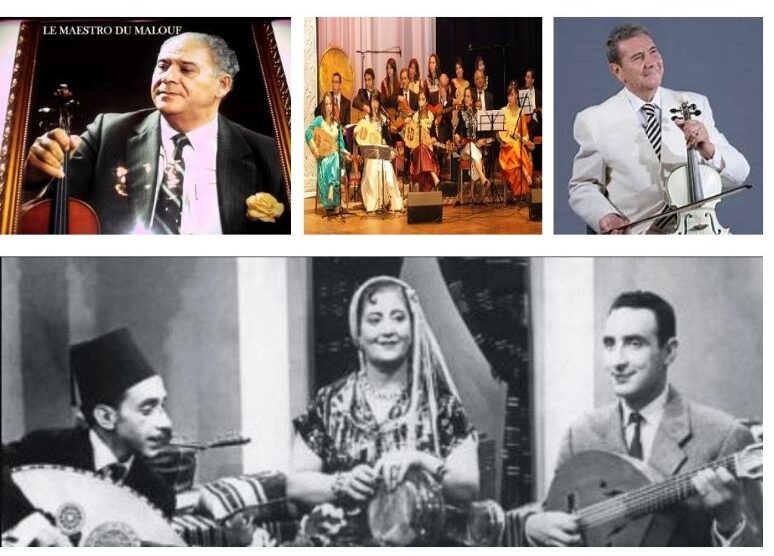 Coming from Arab-Andalusian music, chaabi music was born in the working-class neighbourhoods of Algiers in the first half of the 20th century. It is interpreted in the popular language, the dialect of the capital (hence its name chaabi which means “popular” in Arabic) by masters such as: Hadj M’Hamed El Anka, Maâzouz Bouadjadj, Boudjemaâ El Ankis, El Hachemi Guerouabi, Dahmane El Harrachi, Slimane Azem, Abdelkader Chaou, Amar Laachab, Amar Zahi, Abderrahmane Koubi, Abdelmadjid Meskoud.

With its own specificities, its rhythm and its poetry, it is interpreted by Idir, Ait Menguellat, Maatoub Lounes, Kamel Hamadi, Cherif Kheddam, Djamel Allam, Malika Domrane…

Popular music based on the zendali rhythm. Among its interpreters, we can cite Bekakchi El Kheir, Samir Staifi, Bentoumi Mohamed, Djamel Nordine…

Originally, it is a Bedouin music based on the bendir and the jawaq (the flute). Its interpreters: Ahmed Khelifi, Abdelhamid Ababsa, Menai Ahmed, Amar Bar, Rah Tahar, Bachir Sahraoui, Rabah Driassa, Nora….

Oran music derives its specificity from the harmonious blend of traditional badaoui and modern. Its main masters are Ahmed Wahbi, (singer composer), Blaoui Houari.
The rai was born in the region of Oran and it is expressed in dialectal Arabic. It is a musical form that results from the union of Bedouin music, Latin and Arab-Andalusian sounds. Among the names linked to this musical genre are Cheikha Remiti, Cheikh Khaldi, Cheikh Hamada, Ahmed Saber, Zehouania, Bellemou, Houari Benchenet, Rachid and Fethi Baba Ahmed, Hasni, Cheb Khaled, Cheb Mami, Fadila, Sahraoui…

Gnawa is an ancestral music that comes from sub-Saharan Africa. It is sung by a maalem (master) to music based on guembri, tbel and qarqabus. The most famous interpreters of this music are Othmane Bali, Hesna El Bacharia.