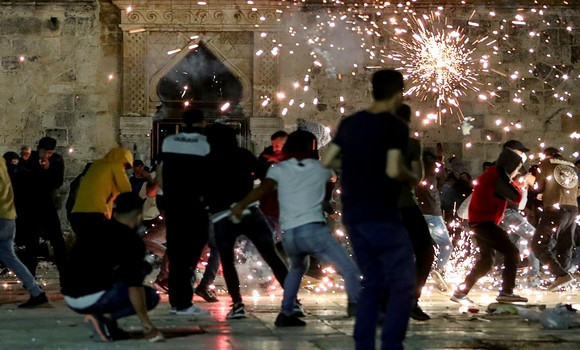 ALGIERS – Friday, 15 April 2022 (APS) – Algeria strongly condemned the attack perpetrated by the Zionist occupation forces against Palestinians Friday at dawn in Al-Aqsa Mosque, “in flagrant violation of the sacredness of the mosque and all relevant international resolutions and charters,” the Ministry of Foreign Affairs and National Community Abroad said in a statement.

Algeria “stresses the need to provide full protection to Muslim worshippers and allow them to perform their rituals in Al-Aqsa Mosque, which is an Islamic Waqf,” said the source.

Algeria called “the international community, including the Security Council, to fulfill their missions, stop these aggressive provocations and ensure the protection of the Palestinian people and their holy places,” said the source.

“The repeated violations committed by the Zionist occupation forces against the Palestinian people in the Palestinian territories and the resulting insecurity and instability,” reaffirm “the urgency of launching a serious peace process that leads to the establishment of a comprehensive and just peace in the Middle East, the withdrawal of Israel from all occupied Arab territories and the establishment of an independent Palestinian state with Al-Quds as a capital city,” stressed the source.