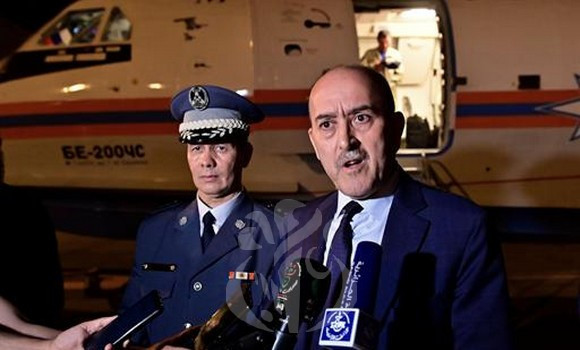 ALGIERS – Thursday, 16 June 2022 (APS) – A fire-fighting aircraft “Berieve BE 200,” chartered for a period of three months from Russia, landed on Wednesday evening at the international airport Houari Boumediene, Algiers.

Minister of Interior, Local Authorities and National Planning Kamel Beldjoud and Director General of the Civil Protection Boualem Boughelaf were present when the plane was delivered at the international airport Houari Boumediene.

“Algeria experienced forest fires last year, we have mobilized all the means, and we have seen that the means that Algeria possesses aren’t enough in the face of such huge fires. On the instruction of President of the Republic Abdelmadjid Tebboune, we had to charter tanker planes from some countries. We had response from Russia and we have received today this plane,” Beldjoud said in a statement to the press.

Beldjoud said that it is a “chartering for a period of three months, i.e. from 15 June to 15 September,” underlining also that it is “a unique fire-fighting aircraft in the world, with a big capacity, that could intervene in all the places, and which is “an additional means for the country and to help the units of the Civil Protection.”

“President of the Republic gave the instruction last year, in view of the fires that Algeria has experienced, to purchase four fire-fighting planes (Berieve BE 200). The order was officially placed and we are expecting to receive, in Algeria, one of the four fire-fighting planes by the end of December 2022, while the three others will be delivered during the first quarter of next year,” he affirmed.