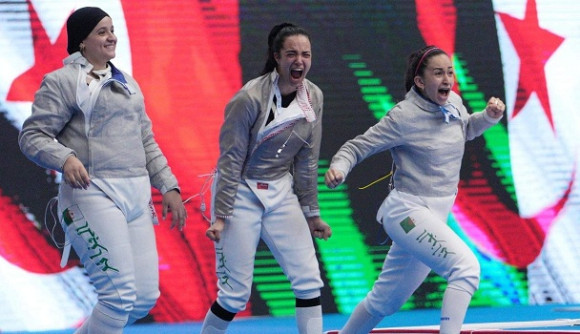 The Gold medal was won by women’s saber team, made up of Saoussen Boudiaf, Zahra Kahli, Abik Bounekab and Kaouter Mohamed-Belkbir, after their victory in the finals over Tunisia (45-27).

The silver medal, however, was snatched by the men’s foil team, composed of Salim Heroui, Youcef Madi, Dani Adem Felah, who lost in the finals to Egypt (20-45).

As for the Algerian bronze medal, it was won by the women’s epee team, composed of Meroua Gueham, Yousra Zeboudj, Racha Malek, winner of the finals (3rd place) ahead of Senegal (45-43).

At the end of this fourth day of competition, Algeria totals six medals (2 gold, 1 silver, 3 bronze).