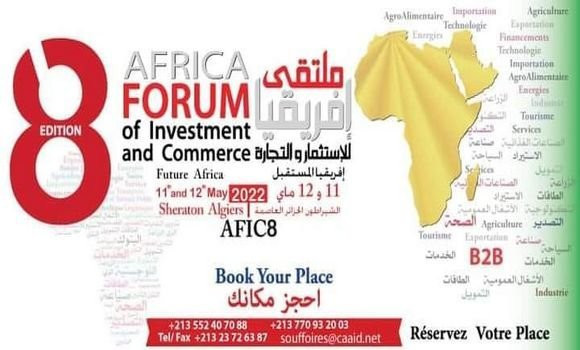 ALGIERS – Tuesday, 10 May 2022 (APS) – More than 650 Algerian and foreign businessmen will take part in the 8th African Investment and Trade Forum (AFIC) scheduled for May 11 and 12 in Algiers, according to the organizers of this event.

Themed “Africa Future,” the forum will be attended by large business delegations representing 35 countries, including the African continent, as well as representatives of African and regional financial support agencies, the Director-General of the Arab-African Investment and Development Center (CAAID), Amine Boutalbi told APS.

The African Union (AU), the Arab League, the African Export-Import Bank, the Arab Organization for Investment and Agricultural Development (AAAID), and the Islamic Chamber of Commerce, Industry, and Agriculture (ICCIA).

In addition to African businessmen and representatives of continental agencies, the will be attended by representatives of European, Asian, and American investment agencies interested in the African market, such as Switzerland, the Netherlands, Belgium, France, Spain, China, Russia, Pakistan, and Mexico.

This strong participation of different continents will make Algeria a trade portal to Africa as the forum will brief them on the African Continental Free Trade Area (AfCFTA), its advantages, its operation, and its role in boosting trade, especially during the post-Covid-19 period.

The event will allow Algeria to highlight its non-hydrocarbon export potential.

As part of the event, 80 exhibitors in several specialties, including industry, mining, textiles, construction, and handicrafts will partake in the fair, said Boutalbi.

Training sessions, meetings “B to B”, meetings with officials of African bodies, and visits to Algerian investment projects for the participating delegations are also planned.

Seventeen (17) Algerian factories in several provinces will receive visits in the coming days to show the true business potential of the country.

Several agreements should be signed in areas such as metallurgy, steel, mining, and export of cement and electrical cables, said Boutalbi.