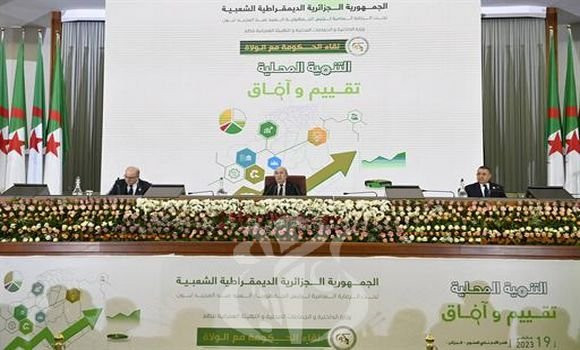 ALGIERS – Thursday, 19 January 2023 (APS) – President Abdelmadjid Tebboune said Thursday that foreign exchange reserves were exceeding 60 billion dollars while the economic growth was 4.1% in 2022 and was expected to reach 5% in 2023.

In an address at the opening of the works of the Government-Walis Meeting at the Palace of Nations, in Algiers, President Tebboune stressed the positive indicators and results achieved over the last three years, through a development strategy and the “participation of walis (province governors) in the resolution of problems hindering companies, because of bureaucratic reasons or legal loopholes.”

Mentioning the achievements that led to “economic and social momentum” in Algeria, President Tebboune cited “the reduction of the import bill between 36 billion dollars to 38 billion dollars a year, against 63 billion dollars in the previous years because of overbilling and embezzlement of public funds.”

“We have succeeded in reducing imports without depriving citizens” of their different needs, President Tebboune said, adding that “there are no more disguised imports.”

Cleaning up imports “is still under way for there remain exaggerated imports,” he underlined.

The president pointed out that the economy is built on the basis of production not importation.