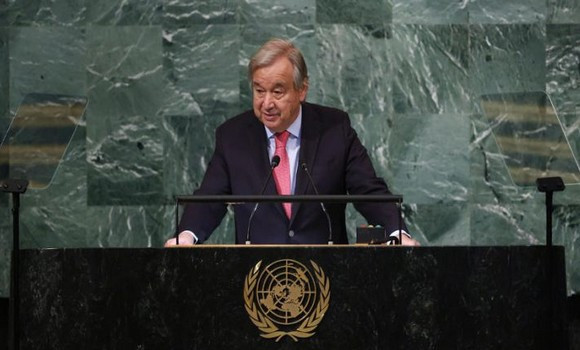 NEW YORK (UN) –Tuesday, 27 September 2022 (APS) – Secretary-General of the United Nations Antonio Guterres confirmed on Monday his presence at the Arab Summit in Algiers, scheduled for November 1- 2, welcoming the “exceptional” contribution of Algeria to the multilateral global diplomacy.

During his meeting with Minister of Foreign Affairs and the National Community Abroad, Ramtane Lamamra, who handed him the invitation sent by President of the Republic Abdelmadjid Tebboune to attend the Arab Summit in Algiers as a guest of honor, Guterres expressed his “deep gratitude to the President, accepting his invitation to attend the works of this event which coincides with the celebration of the 68th anniversary of the outbreak of the glorious Liberation War.”

At the end of his participation in a high-level meeting of the 77th General Assembly of the United Nations (UN), held in New York, the head of Algerian diplomacy held a working session with UN’s SG Antonio Guterres.

During this session, the two parties reviewed the cooperation relations between Algeria and the United Nations as well as the latest international and regional developments, in particular the efforts made by Algeria to promote peace and stability in Libya, Mali, and the Sahel-Sahara region, in addition to its efforts aimed at consolidating the Palestinian national unity and resuming the peace process in the Middle East through the relaunch of the Arab peace initiative.

In this regard, the Secretary-General welcomed Algeria’s “exceptional contribution to the United Nations and to multilateral global diplomacy, in the service of peace and stability objectives and for the settlement of conflicts by peaceful means and the promotion of friendly relations between countries.”

The two parties also discussed “the prospects for completing the decolonization process in Western Sahara, in the light of the continued efforts of the United Nations under the leadership of the Personal Envoy of the Secretary-General, Staffan de Mistura to bring the parties to the conflict, two member States of the African Union (AU), namely Morocco and the Sahrawi Arab Democratic Republic (SADR), to continue direct negotiations with a view to reaching a lasting, fair and acceptable solution for both parties, a solution that guarantees the inalienable right of the Sahrawi people to self-determination and independence.”