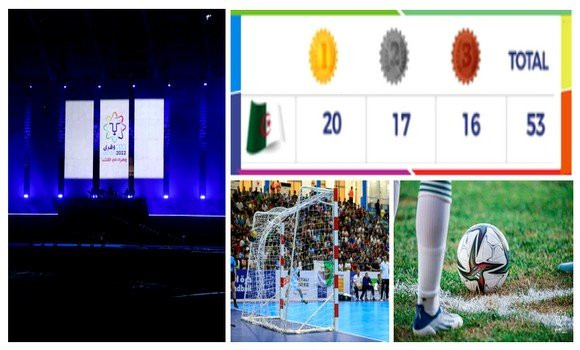 ALGIERS – Sunday, 10 July 2022 (APS) – The Algerian sport has experienced, in 60 years of independence, national striking events, by participating in the biggest international competitions enabling it to win titles in different sporting events, and by organizing international events, the last was the 19th Mediterranean Games of Oran.

The 19th Mediterranean Games of Oran (25 June-6 July) is one of the most important editions of these games since 1951.

The Algerian State spares no effort for the success of this event, highly praised by the sporting bodies and the international media channels.

For the success of this event, several centers and infrastructures were inaugurated in the city of Oran by President of the Republic Abdelmadjid Tebboune in a working and inspection visit to this province, before the launch of the Games, like the new Olympic complex Miloud Hadefi, which comprises a football stadium, a sports hall, an athletics stadium as well as a three-pool aquatic center.

President Tebboune kicked off the Mediterranean Games, marked by the participation of 3,390 athletes from 26 countries.

The impressive and solemn opening ceremony was the showcase of Algeria, shedding light on its civilizational history and its key role in the Mediterranean region through a complete artistic work where the latest technologies were used.

Chairman of the International Committee of the Mediterranean Games (CIJM) Davide Tizzano welcomed the efforts made by Algeria for the success of this edition, organized 47 years after the first edition of 1975 in Algiers.

The project of promoting Algerian sports was launched after independence. Algeria qualified for the first time, in 1968, for the Africa Football Cup of Nations, but the real start was in the 1970s through the “sports reform” instituted by late President Houari Boumediene in 1977 and which he gave a strong impetus to the athletes and put the national sports on the right track.

This sector saw deep reforms affecting old infrastructures that existed at the time when Djamel Eddine Houhou was appointed as minister of Sports and Youth. The most important measure taken then was the integration of sports into the economic system.

Despite the encouraging results achieved the following season thanks to these reforms, this policy was abandoned after the events of October 1988, causing the decline of the national sport.

The handball is unquestionably the discipline which shined the most with no less than seven African championships won by the Algerian men’s team in 1981, 1983, 1985, 1987, 1989, 1996 and 2014, in addition to dozens of trophies snatched by the  Algerian clubs in the Champions League, the African Cup Winners’ Cup, the CAF Super Cup and the Arab Club Champion Cup.

For its part, the Algeria football team managed to win two Africa Cups of Nations, the fist was in 1990 in Algeria and the second in 2019 in Egypt thanks to a new generation of talented players, like Riyad Mahrez and Youssef Belaili.

Algerian military football has also achieved great results, thanks to the gold grabbed at the World Military Cup twice: in Brazil in 2011 and in South Korea in 2015.

Algeria participated for the first time in the Olympic Games in 1964 after the creation of the Algerian Olympic Committee in 1963. Mohamed Lazhari was the first to represent Algeria in these Games.

The first Algerian medals (bronze) were won by boxers Mohamed Zaoui and Mustapha Moussa in 1984 at Los Angeles Olympics.

The Algerian sport experienced its glorious moments between 1990 and 2000, notably in boxing and athletics.

Hassiba Boulmerka had the honor to offer Algeria its first Olympic gold medal at the 1500-meter event in 1992 at the Olympic Games of Barcelona (Spain). She also snatched the gold medal in two athletics world championships, the first in 1991 in Tokyo and the second in 1995 in Sweden, in addition to other gold medals in several editions of the Mediterranean Games in the same sporting event.

Two gold medals were won by Noureddine Morsli in the 1500-meter event and late Hocine Soltani in boxing in the Atlanta Olympic Games in 1996. The latter was also a bronze medalist at Barcelona Olympic in the featherweight category.

For his part, Noureddine Morsli was three times world champion (1991, 1993, 1995). He improved five outdoor and indoor world records during his career.

In boxing, Algerian Mohamed Benguesmia snatched in 2003 in Algeria the world title of the light-heavyweight at the World Boxing Board.

Algerian judokas distinguished themselves on the international scene with the silver medal of Amar Benikhlef at Beijing Olympic Games (China) in the -90kg category, and the bronze medal of Soraya Haddad, also in China, in the -52kg category.

For her part, Salima Souakri was ten times champion of Africa, a bronze medallist at the World Junior Championships and fifth at the 2004 Olympics in the -52kg category.

In karate, Lamia Matoub grabbed the bronze medal at the World Championship in Madrid in 2018.

Algeria can boast of having given birth to late champion Mohamed Allek, five time gold medalist at the Paralympics of Atlanta in 1996 and of Sydney in 2000, in addition to a bronze medal at Athens Games in 2004.

The Algerian athletics distinguished itself once again at the Olympic Games with the performance of Benida Nouria Merah with a gold medal at the 1500-meter at Sydney in 2000.

In Sydney, athlete Aissa Djabir Said-Guerni won the bronze medal then a gold medal in the 800-mter event at the World Athletics Championships in Paris (France) in 2003.

The last Olympic medal was won in 2012 by athlete Toufik Makhloufi who grabbed the gold in the 1500-meter event in London.